Number of affected people may increase as calamity continuous: Sherry 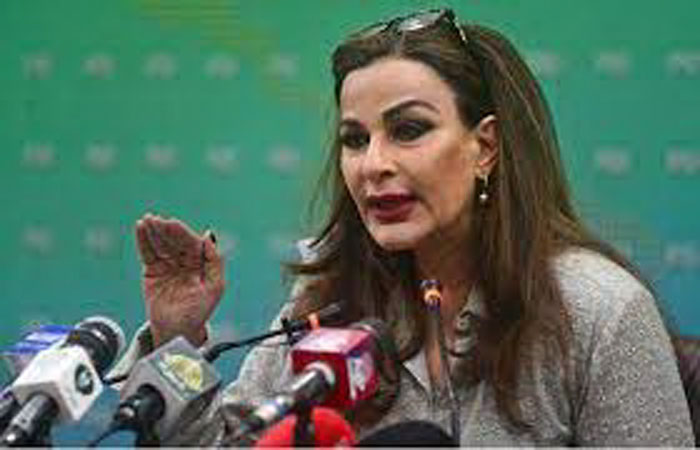 Federal Minister for Climate Change Senator Sherry Rehman on Sunday stressed that the number of flood-affected population may rise from 33 million as the monster flood continues.

The minister in a statement said the humanitarian action is right now being led by the government and supported by the United Nations and other humanitarian agencies. She said 1,033 people have lost their lives and more than 1,500 have been injured. Kabul River is still at very high flood level at Nowshera as the water has crossed 300,000 cusecs which is why residents in some areas have not been allowed to come back to their homes.

The minister said water levels in River Indus at Taunsa, Sukkur and Chashma are at HIGH Flood level as it crossed 500,000 cusecs while Guddu and Kotri are in Medium Flood level. She said rains have disrupted the essential communications systems which are now being rebuilt by NHA and others. Kalam has received most rains at 41.5mm and Bagrot in Gilgit-Baltistan has received up to 21mm.

“More rains are expected in the northern part of AJK, KP and Balochistan. As the rain has abated in some areas, the NDMA and Pak Army have increased their helicopter sorties for rescue. Pak Navy has also been deployed on a terrain it would not normally operate its boats,” she said.

Sherry Rehman said the Economic Affairs Division (EAD) and other ministries were working round the clock with about 35 multilateral and bilateral donors to assess needs and bridge gaps in relief efforts.

She said Benazir Income Support Program (BISP) has started rolling out Rs25,000 relief tranches of Rs35 billion for the most vulnerable. She said 218,112 beneficiaries have been provided with immediate cash assistance.

However, hygiene kits, waterproof tents are still short on the ground for stranded families.

“Many are being housed in empty schools as the ground is too wet. Just as we battled with relentless rains in the South of Pakistan in over 72 calamity-hit districts, the Indus river flooding from the north has increased the number of calamity-hit districts as reports of floods in Gilgit-Baltistan have come in as well. It’s really a perfect storm,” the minister said.

“It is unfortunate that a time of national emergency the opposition leadership and rank and file is busy scoring points instead of helping those in need,” she said.

“From social media activists who are urging local and international donors to not assist Pakistan’s vulnerable people and over 33 million affected, the toxic discourse of the PTI continues to compromise Pakistan’s relief efforts. This is highly irresponsible behaviour at a time when the country is reeling from shocks like never seen before,” she said.