* More than 100,000 people associated with bee farms in the province may be faced with starvation 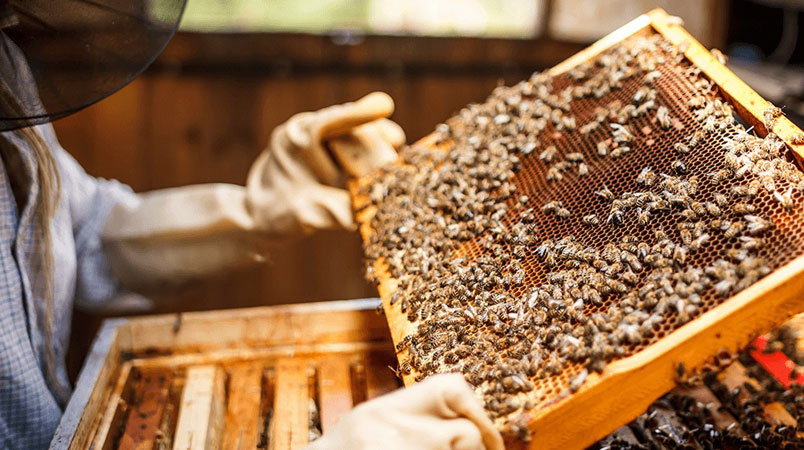 Like others sectors, the recent devastative floods have also brought havoc to many beekeepers where their bees boxes were washed away by the gushing water here in KP. The beekeepers of floods hit Swat, Charsadda and Nowshera have suffered great economic losses after their bees- boxes were swept away by the record breaking floods that wreaked havoc to humans and private properties in Khyber Pakhtunkhwa. “This morning, I rushed towards River Kabul’s southern bank after my village Mohib Banda was inundated by the floods in a bid to save my 100 bees boxes but all of them were swept by the flash water, in a gify,” said Kamal Khan, a beekeeper of Nowshera while talking to APP.

The 23-year-old beekeeper was living a happy life until August 27, 2022 when an over three lakh cusec water in river Kabul washed away all his bee-boxes within few seconds and he was now looking towards government help to restart his pain sticking business once floods situation become normal. Kamal had entered in beekeeping profession after abandoning his education seven years ago following death of his father due to cancer and was living a prosperous life unless the today flood struck.

He said, “my entire family was in deep shock after the death of my father Hamayun Khan and I had no idea what to do? However, I started this business on the advice of my mother and today I am again in shock after destruction of my all bees colonies.” “Initially, I purchased 20 bee-boxes and by the grace of Allah Almight, it increased to 100 boxes within few years due to my consistent hard work despite limited resources,” he said. “As the flood struck my village on Saturday morning, our entire family rushed to River Kabul bank to shift our bee-boxes to safer places, but within few minutes we saw ourselves stranded in eight to 10-feet floodwater spread over miles, with people screaming and running for their lives in Mohib Banda desperately,” he said.

He said they had managed to save only 20 bee-boxes and shifted it in his room but those were also destroyed due to entrance of flood water inside the rooms. He said he had suffered almost Rs eight lakh loss. The motivated youngster said he would restart his business soon after the flood situation improved. He said the government should give interests free loans and fix honey rates so that the floods hit beekeepers could benefit from their labour. The energetic beekeeper said in the past he had gone to Punjab and Azad Kashmir to easily provide bee-flora plants to his bees and expand their business. However, the situation in Khyber Pakhtunkhwa was now favourable to beekeepers due to increase of bees flora plants due to billion trees project. Sher Zaman, General Secretary of the All Pakistan Beekeepers Association, said the recent flood had played havoc with the beekeeping sector in Khyber Pakhtunkhwa.

“The torrential rains and subsequent devastating flash flood had caused million rupees loss to the beekeepers, exporters and honey traders in the province and the loss could hardly be overcome without the support of government,” he added.

He said thousands of bees boxes were washed away in Khyber Pakhtunkhwa where beekeepers were facing a lot of problems.

“About 7,000 to 10,000 honey farms existed in the province and if compensation and loans were not provided, more than 100,000 people associated with bee farms in the province may be faced with starvation.” “Beekeeping is a profitable business and any person with at least Rs 250,000 to 300,000 can easily purchase 50 to 70 bees boxes to achieve up to 20kgs to 30kgs honey from each box twice a year,” he added.

He said Pakistani honey was being preferred in the Middle East and other countries due to its better quality and demanded compensation to floods affected beekeepers. Zaman admitted that slight adjustment in prices of bair and falsa honey was made owing to hike in fuels and transportation charges besides foreign made medicines and sugar.

He urged KP government to impose a ban on cutting of ber and palosa trees on the pattern of deodara and award strict punishment to timber mafia to save the little creature from extinction.

The Government should make special provision of interest-free loans under Islamic banking system to encourage flood-hit beekeepers. “The recent flood have also affected the local bee population scientifically known as Apis florae ( Swati small bee) due to loss of bee-flora plants in Swat,” an official of Agriculture Research Institute (ARI) at Tarnab, Peshawar. He said there was every possibility of loosing an average of five to ten kgs out of 1000 kilogram of honey production if floods preventive measures were not taken for their preservation and protection. “There is a possibility of losing the wild bees in future if floods mitigation efforts was not made besides proper attention to their preservation and management of natural forest,” said Dr Mumtaz Malik, former chief conservator of wildlife department.

“Wild bee is a big source of quality honey that needs proper strategy and mechanism to get maximum production and protection from flood and rains,” Dr Malik said, adding that honey business could be developed as a non-wood-forest product for the locals living near forests to raise their income through preservation and protection of wild bees population from floods. He stressed the need on capacity building of beekeepers to face any situation like flood and raising nurseries of bee-flora plants for promotion of honey industry.

Focus on conservation of Apis Dorsata (wild bee) should be made as it has the ability to produce 35 to 40 kg honey from each comb, he said, adding that the wild bees usually made their nests in tall trees or buildings in reserved forests.

He said Pakistan has huge potential of producing over 7,500 to 8,000MT honey from about 300,000 colonies per year and diversion of financial resources to flood mitigation was need of the hour. Admitting climate change’s effects on the population of Apis Flori and Apis Dorsata commonly known as “Swat bees”, he said Apis mellifera was imported from Australia in 1977 owing to her speedy growth and increased power of honey production.

He said a research project was launched at Agriculture Research Institute Tarnab, Peshawar, Faisalabad and National Agriculture Research Centre Islamabad in 1979 to analyze mellifera’s properties. Mallifera produces about 20 to 25 kgs honey per box against six to eight kg by native bees two times in a year. “Apis Dorsata has an ability to produce 40kgs to 45 kgs honey from each hive mostly in tall trees and buildings,” he said, adding around 120,000 to 150,000 wild bees were busy in one meter-length and half-meter wide comb making 120 degree angle and their honey generation powers affected in case of torrential rains and floods due to loss of plants and destruction of their hives.