Pakistan’s people are our priority 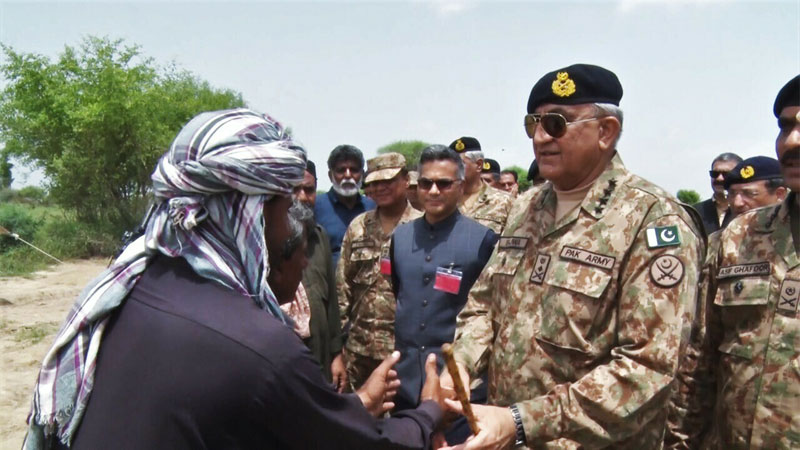 Pakistan Army on Saturday vowed to continue efforts until the last flood-affected citizen is rehabilitated. “The people of Pakistan are our priority, and we won’t spare any effort to assist them in this difficult time,” said Chief of Army Staff General Qamar Bajwa as he visited flood-hit areas of Balochistan on Saturday.

In a statement released by the military’s media wing, the Inter-Services Public Relations (ISPR), the military said that the army chief visited flood relief and medical camps established at Goth Sadoori, Lakhra, and Lasbela in Balochistan. He inquired about the well-being of local people affected due to floods. He also met troops busy in relief operations and lauded their efforts in service of men, women, and children in distress. “The safety and well-being of our countrymen come first, and we won’t rest until each one of the flood-affected is not only reached but rehabilitated, no matter how much effort is required,” he said.

The COAS directed to use all available resources to assist the civil administration in the rescue, relief, and rehabilitation efforts of people and infrastructure in the flood-affected areas. “We must reach out to our brothers and sisters in need without waiting for orders and help them overcome this natural calamity,” he said.

Separately, Commander Peshawar Corps Lieutenant General Hassan Azhar Hayat visited the flood-affected areas in Nowshera and directed to undertake all measures in rescue, relief and rehabilitation efforts on an emergency basis in coordination with the civil administration. He also directed that all resources be utilised to help the affected population and restore critical communication infrastructure.

According to the ISPR, a total of 5,487 ration packs and over 1,200 tents have been distributed among families affected by the flooding. The press release further said that 117 relief camps have been established nationwide.

In order to help the flood victims, 7,522 Pakistan Army troops have been deployed along with 50 boats, whereas 25 field medical camps have also been established. As many as 25,000 patients have been treated so far. Furthermore, the Army Flood Relief Coordination Centre has been established under the Army Air Defence Command with a mandate to coordinate rescue and relief efforts in synchronisation with stakeholders at the army level. The press release stated that country-wide collection points were being established to synergise the efforts with respect to the collection and distribution of relief items.

The Pakistan Army on Saturday started distribution of ration by helicopter in the flood affected areas where the by-road access was not possible to the people. The use of helicopter was started as the weather conditions become clear in the morning, said a press release issued here.

The ration was distributed in various areas of Tehsil Paroa including Jhok Mamdu, Jhok Gadi and others through MI-17 helicopter so that the people trapped in the flood-affected areas do not suffer in getting food and drinks.