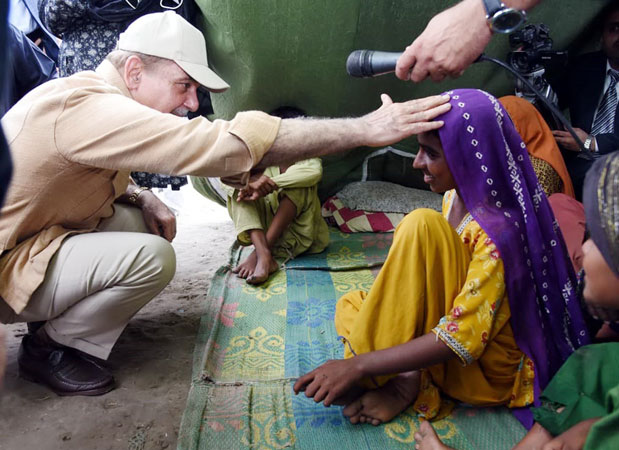 Prime Minister Muhammad Shehbaz Sharif on Saturday said that the entire country was badly affected with flash floods due to incessant monsoon rains, and resolved to overcome the challenge with collective efforts.

The prime minister said that the heavy downpours in the season had caused human losses, damaged road and links infrastructure across Khyber Pakhtunkhwa, Punjab, Sindh and Balochistan.

During a visit to review rescue and relief operations in flood-hit areas of Faqirani Jat, Oplano and others, the prime minister was given a detailed briefing over the situation and the relief efforts. Sindh Chief Minister Syed Murad Ali Shah and federal ministers also accompanied the prime minister. Speaking on the occasion, the prime minister said that he had witnessed the vast area which was inundated by flood water.

In Swat and Kalam, flash floods had caused human and financial losses, swept away road infrastructure and bridges, and now headed towards Charsadda and Nowshehra posing a severe threat there, he said, adding the district administrations, rescue agencies and the armed forces had been fully supporting the rescue and relief efforts and evacuating the people to safe places. He said considerable damage was caused to the Munda dam.

The prime minister said in the flood affected areas, rescue and relief efforts were being carried out. The prime minister also appreciated the efforts of the chief minister, administration and the armed forces for their rescue and relief operations in these areas. Shehabaz Sharif said the federal government had allocated a grant of Rs38 billion to support flood-affected families with disbursement of Rs25,000 each.

The prime minister said he had already announced a grant of Rs15 billion for Sindh, while the distribution of flood relief amount among each family had commenced in Sindh after Balochistan under Benazir Income Support Programme (BISP). He said the BISP had the complete data, ensuring prompt and justified distribution among the deserving families. Assuring the provincial governments of the federal government’s support, the prime minister said others provinces would also be extended with such grants.

He said that a combined survey would be completed soon which would enable them to get an estimate of the damages and losses caused by floods across the country. The prime minister stressed that in this hour of trial, they had to work collectively, irrespective of doing politics. Without naming Pakistan Tehreek-e-Insaf (IMF), he said it was unfortunate that a political party was doing politics over the agreement with International Monetary Fund (IMF), and such self-centered politics could cause irreparable damage to Pakistan as an IMF board was scheduled to hold a meeting. “I have never witnessed such self-centered politics, it will be huge injustice with Pakistan and a big conspiracy against the country,” he opined.

The prime minister said that they would have to devote themselves for the country and the nation, and urged the affluent, well-off industrialists and businessmen to come forward and support the people suffering from the impacts of rainfalls and floods. The prime minister said it was a time to seek mercy of Allah Almighty. The chief secretary, director general provincial Disaster Management Authority, deputy commissioner, officials of Pakistan Navy and other relevant authorities briefed the prime minister on the relief operations, flood situation and rehabilitation of the damaged infrastructure.