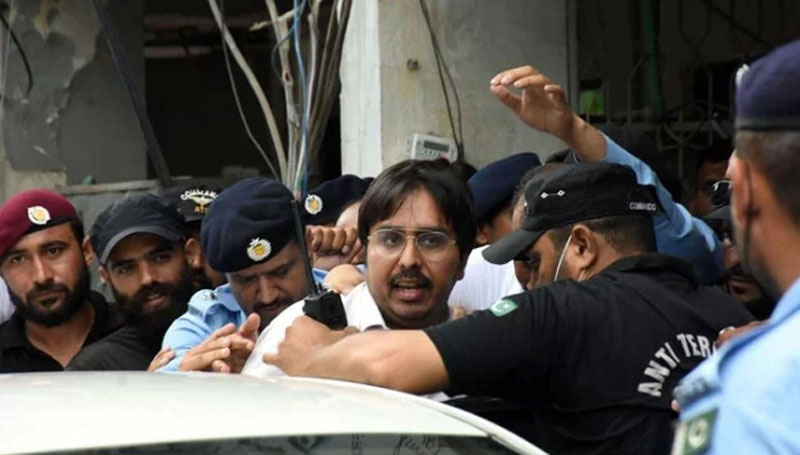 The hearing of Pakistan Tehreek-e-Insaf (PTI) leader Shahbaz Gill’s bail application was adjourned till August 29 due to the absence of investigating officer (IO) in the case.

Additional Sessions Judge Tahir Abbas Supra was conducting the hearing, during which prosecutor Raja Rizwan Abbasi and the lawyers of Gill were also present. The prosecutor informed the court that the record was not available as the investigation officer was in Karachi.

According to the police officials, the investigation officer was contacted but was out of reach with his cell phone switched off. Prosecutor Rizwan Abbasi said that even if the record was presented, he would not be able to give arguments. “I also want to look at the record, I am not ready yet,” he said. He suggested that the hearing be adjourned till tomorrow (Monday). Gill’s lawyers argued that the case was unnecessarily facing delays due to the police. Judge Tahir Abbas Supra said that the IO was being given a last chance, and adjourned the hearing till tomorrow. The court, in the last hearing on Friday, had asked the police to ensure that they present the records by Saturday, however, the law enforcement agency failed to meet the deadline.

Gill is facing serious charges after he allegedly incited mutiny within the military while speaking on a private TV channel earlier this month. He was already facing sedition charges, but the Islamabad police – earlier this week – also registered a case against the PTI leader over alleged possession of an illegal weapon.

He was booked in the case after police raided the incarcerated PTI leader’s room in Parliament Lodges late Monday – where they recovered weapons, a satellite phone, and foreign currency. On Saturday, the district and sessions court granted bail to Gill in pistol possession case.

During the hearing, the court approved Gill’s bail request. The judge directed former prime minister Imran Khan’s chief of staff to submit Rs25,000 as the surety bond. The PTI, since Gill’s arrest, has been repeatedly alleging that he has been tortured, humiliated, and sexually assaulted in police custody, however, the police and government deny all claims.

Currently, the PTI leader is on judicial remand in the two cases which will end on September 7.

Meanwhile, Shahbaz Gill challenged the Islamabad High Court’s (IHC) order, endorsing his two-day custody to Islamabad police, in the Supreme Court on Saturday. In a plea filed by lawyers Salman Safdar and Chaudhry Faisal Hussain, the petitioner requested the SC to set aside the IHC order.

The petition stated that the investigation in the case be declared illegal and unlawful for the prosecution and be set aside straightaway for being violative. Terming Gill’s physical custody “unconstitutional on account of breach of fundamental rights of life and dignity of a person” the lawyers further asked the SC to discharge Gill.

The plea further asked the apex court to declare the IHC’s order “illegal and unlawful” and stated that it was sheer disregard of Article 9 & 10-A of the Constitution of Islamic Republic of Pakistan, 1973.

The petition further stated that the IHC had quite seemingly failed to protect the basic fundamental and human rights of the petitioner by remanding him to police custody after noticing that he had been subjected to torture.

The lawyers said in the petition that Gill was subjected to “the most humiliating and degrading violence in police custody”. The petition further stated that “sufficient evidence was placed before the learned single bench all of which was disregarded by the court”.

The petition stated that record was presented by the Adiala Jail authorities which made it abundantly clear that the petitioner had bruises as well as bodily injuries when he was committed to judicial. “Therefore, the decision handed down by the learned Islamabad High Court is liable to be set aside for being violative of Article 9 and 10-A of the Constitutional of Islamic Republic of Pakistan,” it said.