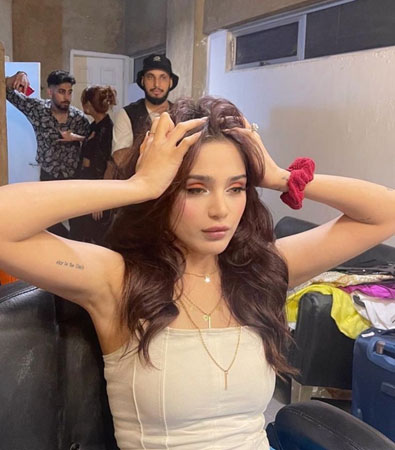 Singer Aima Baig described how her life is going through a picture which is going viral on social media.

The viral picture on the picture and video-sharing social media application Instagram showed her holding her head. The caption read, “life lately.” The click got thousands of likes and comments. The singer also replied to netizens’ remarks on her social media platform. A user disagreed with a netizen who stated that money makes a person ugly. When told she looked scary, she replied that was her goal. The singer interacts with fans by sharing visuals from her personal and professional life. The images and videos go hit and get millions of likes from fans. Her dream of performing at the Wembley Stadium in United Kingdom’s capital London came true. She shared visuals from her trip to the city. The singer became Spotify’s most-streamed female artist of Pakistan for 2021. She said her dream came true. She was thanked for her amazing work this year by the music streaming portal.

Aima Baig got engaged with Shahbaz Shigri and shared a click of her ring on March 20. They had frequently made headlines by writing romantic and heavily cheesy Instagram posts for each other. It is pertinent to note that rumours of them breaking up made rounds after the both. unfollowed each other on Instagram.