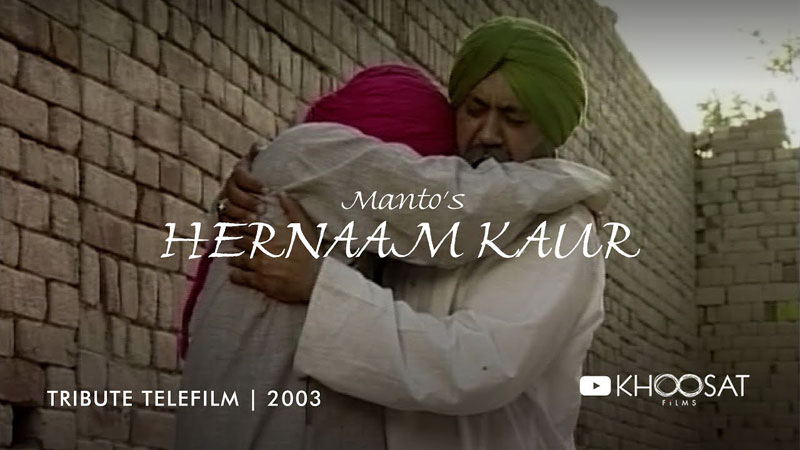 Basking in the success of Kamli, Sarmad Khoosat is excited yet nervous to re-release his 2003 telefilm, Hernaam Kaur.

The telefilm is based on Saadat Hassan Manto’s short story Hernaam Kaur which recalls the horrific happenings during the partition, the enigma of gender and identity whilst inquiring into the timeless themes of the human condition.

The film will be made available to stream on Khoosat Film’s official YouTube channel today at 8pm.

The film written and directed by Sarmad Khoosat himself, while it is produced by Erfan Khoosat.

The telefilm boasts of a stellar cast that includes Sohail Ahmed. Sarmad Khoosat, Saba Hameed, Erfan Khoosat, Fareeha Jabeen, Aasiya, Ahtsham ul Haq, Neha Malik and Sameera among others in pivotal roles. The Zindagi Tamasha director shared the promo to Instagram on Wednesday expressing how excited yet nervous he was to put Hernaam Kaur out there.

The post read, “Full of 101 technical and aesthetic blunders and glitches but 101% love and honesty. A lot of friends and fans have asked to make it available online. Am a tad bit nervous about it too, but whatever?

@khoosatfilmsofficial In our stream of nostalgic throwbacks, we will be re-releasing ‘Hernaam Kaur.’ The gripping telefilm pays homage to Manto’s piercing narrative on the pain of partition and the enigma of gender and identity, inquiring into timeless themes of the human condition.

Watch the telefilm on our YouTube channel Khoosat Films at 8pm on Friday, 26th August. Stay tuned for more from the archives.”

In a stream of nostalgic throwbacks, Khoosat Films also released the series Shashlik that came out 21 years ago between 2000-2001 featuring him and Nadia Afgan. The project marked his debut as a writer and later as a director too.