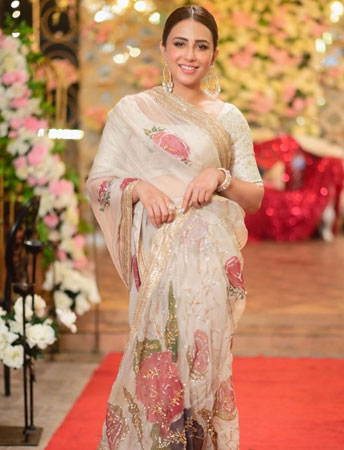 Actor and model Ushna Shah shared pictures of her in saree on the social media application Instagram and they are going viral.

The viral pictures showed Ushna Shah her in a white saree. The caption read, “Sareebral superiority”

Celebrities and other users of the application complimented her looks with their comments.

The celebrity is one of the celebrated artists of the local showbiz industry. She proved she is a force to be reckoned thanks to her stellar performances in serials like Cheekh, Balaa and Bewafa among others.

She is currently seen in ARY Digital serial Habs.

Furthermore, the celeb will feature in the Pak-Turk joint drama series based on the life of Salahuddin Ayubi, a Muslim leader.

The actor also shares pictures and advice with her social media posts too.

Previously, she advised parents to not depend on celebrity for the upbringing their children. “Entertainers are there to entertain,” she stated. “They aren’t there to teach your children the lessons that you haven’t bothered to teach them at home yourself.” She went on to say if it’s good enough for the children in their family to see but not good enough for yours, then stop them from using social media or ban them from visiting their profiles.