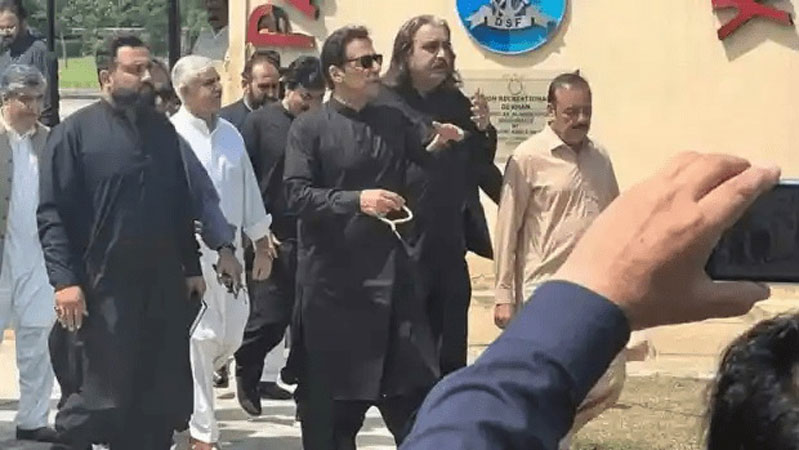 PTI chief and former premier Imran Khan Friday visited the flood-affected areas of Khyber Pakhtunkhwa and directed the provincial government to improve scale and speed of the assistance to the people, including preventive measures, against the spread of disease, especially in children.” He was accompanied by Chief Minister Mahmood Khan, Ali Amin Gandapur and others. Imran visited the flood devastated areas of Dera Ismail Khan and Tank and also took an aerial view of the prevailing situation.

Imran maintained that “the sheer magnitude of the flooding that I saw in Tank & DI Khan shows the challenge Pakistan is confronted with, as this is the situation in many other areas across the country.”The ex-premier also visited the flood devastated areas on foot to get a briefing on the damages and deaths from officials present on the ground. He also met some flood victims at a relief camp set up by the K-P government in DI Khan. Imran said the only way to avoid the disaster caused by floods was to build dams. The former prime minister said Sindh and Balochistan had faced more destruction due to floods. He said even in 2010, the country did not suffer from floods as much as it was suffering now.

Emphasizing the importance of construction of dams to prevent floods, the PTI chairman said there were plans to build 10 dams across the country during his tenure. He appealed to the people of the country to extend their support for the relief and rehabilitation of the flood-affected people. Imran said inflation cannot be stopped until economic stability comes to the country. Taking a swipe at the coalition government, he said the country was ruled by criminals and one of them was abroad. Sharing his views on the upcoming by-elections, Imran added that his party will claim victory.

Imran also shared a post on his Twitter and penned, “Went today with CM KP to see the flood devastated areas of DI Khan & Tank today. “The level of destruction is massive and have discussed with the CM how to improve scale and speed of the assistance to affectees including preventive measures against spread of disease, especially in children”, the former premier added. Khan said the governments of Punjab and KP should provide immediate relief efforts to the flood victims, who should be assisted without any discrimination. “I will not leave the people alone in this time of distress,” he added.

Earlier, Khan criticized the federal government for giving priority to ending cases against it instead of the victims of rain-induced floods, saying that the people of the country cannot be left at the mercy of this “incompetent group” and he will visit the flood-hit areas himself. A meeting of the PTI political committee was held under the chairmanship of the former prime minister in which the current political situation was also discussed, according to sources.