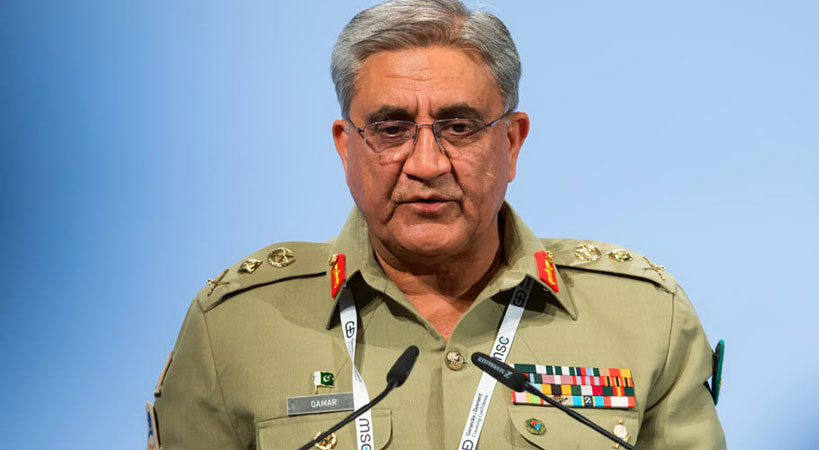 Chief of Army Staff ( COAS) General Qamar Javed Bajwa on Friday reached Karachi where he was briefed about flood situation in Sindh and Balochistan and response measures to help the flood victims. The COAS would also visit army troops busy in rescue and relief efforts in Sindh and Balochistan, the Inter Services Public Relations (ISPR) said. The Army Flood Relief centre was established at Headquarters Army Air Defence Command Rawalpindi to oversee, coordinate National Flood Relief efforts across the country in coordination with Military Operations Directorate. The Flood Relief Centres being established in various parts of the country would assist collection, transportation and distribution of flood relief goods to flood victims in various provinces. The Army troops were shifting people to safer places, providing shelter, meals and busy in medical care to flood affectees. Moreover, the Army Relief efforts continued in the flood-hit areas whereas a tent village was established at Thatta for 60 families. The forward bases were still functional at Nagarparker, Badin, Thatha, Sujawal, Sangarh, Jamshoro, MirPur Khaas and Dadu district for providing ration and relief items among flood affectees. As many as three additional forward bases were established at Tando Allah Yar and Matiari. The mobile medical teams were providing medical care in far flung areas of the province. In Kot Diji, the Army teams carried out dewatering operations and also distributed ration bags. In Khairpur, the evacuation operation was carried out by the army troops and they also carried out distribution of ration packets among the flood affectees. In Noshero Feroze, the army troops executed a dewatering operation and distributed ration bags in the area amongst the flood affectees. In Dadu, the provision of cooked food and relief items to flood affectees and evacuation of standard population by rescue teams were under taken. In Sanghar, the Field Medical Centre was established and more than 136 patients were treated. In Kambar Shahdad Kot, the rescue operations to evacuate stranded individuals was carried out by the army troops. In Thatta, a tent village was established for 60 families along with distribution of ration and dewatering operation was executed. In Badin, a flood relief camp was established at Tehsil Matli; rations packets along with tents, mosquito nets and cooked food distribution was done by the troops. In Jhal Magsi, the relief and dewatering operations were underway in Gandhawa city where some 250 ration packets were distributed alongwith cooked food provided to 110 flood affectees. In Naseerabad, the rescue and relief operation were in progress whereas 500 individuals were shifted to relief camps and 200 ration packets were distributed. In Punjab, army relief efforts were in the full swing as 300 individuals were evacuated to safer locations in Dera Ghazi Khan and 2,000 patients got treated. Moreover, 50 relief camps were established in flood affected areas where 5,562 individuals accommodated. Overall, 38,242 ration packets were distributed in flood affected areas; 37,428 individuals were evacuated to safer locations. Some two field medical camps were established and two other field camps were established at Mangrota, Taunsa & Fazilpur, Rajanpur by two Corps; each field Medical Camps had a Lady Medical Officer in addition to two Medical Officers, where 3,847 patients were treated so far and four days medicines were given to the patients. In Khyber Pakhtunkhwa (KP), due to very high levels in River Swat at Khwazakhela Charsadda, Noshera and Risalpur were highly threatened. The rescue operation carried out by Army in D.I. Khan – 13 individuals were rescued, and nine relief camps were established and 1,110 ration packets amongst affectees were distributed. The female medical centers were established at Village Rori and Maddi where 600 patients were treated. A medical camp was established at Darazinda and 400 locals were treated. The army troops were assisting civil administration in removal of debris and opening of blocked roads in Swat.