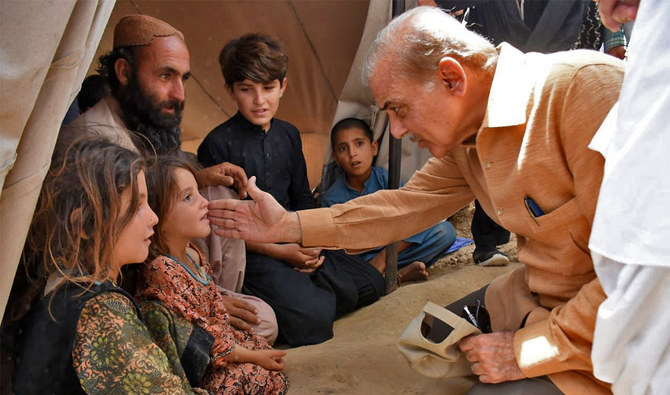 Prime Minister Shehbaz Sharif will visit the flood-hit areas of Sindh and review the ongoing relief and rehabilitation activities in the affected areas.

He would make an aerial visit of the Sukkur, Rohri, Khairpur, Faiz Ganj, Kot Diji, and Thari Mir Wah areas.

Later, the district administration of Sukkur and the representatives of the provincial disaster management authority would brief the prime minister about the ongoing work for relief of the flood-stricken people and rehabilitation of the infrastructure.

The prime minister would also interact with the flood-affected people to review the ongoing relief and rehabilitation work. Later, the Sindh chief secretary and chief engineer of Sukkur Barrage would also apprise the prime minister of the destruction caused by the floods.

Sindh Chief Minister Syed Murad Ali Shah on Monday said the province has received around 500% more rainfall than its monsoonal average and the “situation is more critical than the floods of 2010-11”.

Murad said the average for the season has been between 150-200mm of rainfall across the province.

Addressing a press conference in Sukkur, the chief minister stated that the “gravity of the situation could be realised from the fact that the Pakistan Meteorological Department recorded 355 mm of rain on August 19 in Padidan town of the Naushero Feroz district, while Guddu Barrage was flooded”.

The Sindh government declared 23 districts of the province calamity-hit due to the devastation caused by extraordinary monsoon rains followed by devastating floods.

Provincial Information Minister Sharjeel Memon said at least 239 people have been killed and over 700 have been injured across the province.

He added that in the Hyderabad division, 31,684 houses were partially destroyed, 25,812 were completely destroyed and 830 cattle were also lost.

Meanwhile, in Shaheed Benazirabad division, 54,962 houses were partially destroyed, 23,000 were completely destroyed and 696 cattle were lost.