* The whole idea of putting together spices and letting them simmer in the heating agent of oil and other whole spices, mixed with the richness of onions, tomatoes and ginger was a gift 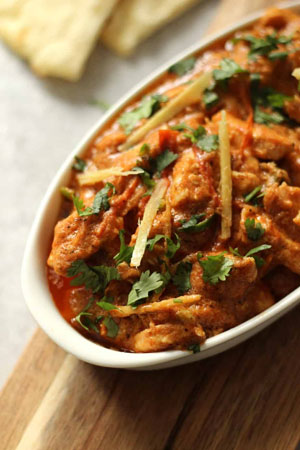 If the potato is considered to be the king of vegetables, the chicken should be made the king of non-vegetarian cuisine. Cooked or roasted or boiled in the minimalistic of spices, Chicken is an ultimate dish to uplift any day, especially on weekends. While we are aware of the usual Indian preparations of chicken that are cooked in a few minutes with just a few spices, the Pakistani Ginger Curry Chicken is heavenly for it has the aroma and flavour of the spices along with the spicy taste of the ginger. The cooking style may appear to be a bit similar to what we do in Indian kitchens, but it is different with the help of the touch of ginger.

The whole idea of putting together spices and letting them simmer in the heating agent of oil and other whole spices, mixed with the richness of onions, tomatoes and ginger was a gift of the Royal kitchens of the Mughals. With the idea of preparing new cuisines for the Kings in the Royal court, the chefs would keep experimenting with the ingredients. According to the legends, it is during one such experiment session of the Royal chef, that the Chicken Curry was invented.

With the decline of the Mughal rule in India the Royal chefs brought the Royal recipes to the streets, from here they made inroads into the daily households. But after the partition of India, forming Pakistan there came about variations in the cooking style. In Pakistan, the variation in the Chicken Curry brought the addition of Ginger.

A handful of coriander Leaves

In a pan over medium heat place a pan.

Pour oil, let it heat, and then add cumin seeds and cardamom.

Let it sputter and then add garlic and ginger.

Sauté until the ginger and garlic change colour.

Now, add the onions. Sauté until the onions become translucent and then add the chicken.

Give it all a good mix. Keep cooking the chicken until it starts to change colour.

Mix it all well and let it simmer for about five minutes.

Now, add curd, mix it well and let it cook for about another five minutes.

Then, add ginger and water.

Cover and let it simmer on low flame for 7 to 8 minutes.

Now, drop some butter and chopped coriander leaves and cook for a few minutes. Serve.