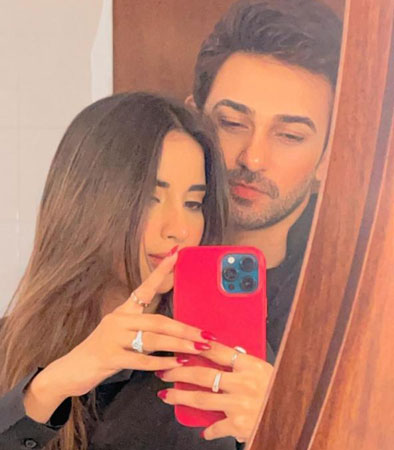 Actor Ali Ansari posted a picture of him with celebrity-wife Saboor Aly and the click is going viral on social media. Ali Ansari’s social media post got thousands of likes and heartwarming comments from Instagram users.

A user wrote that they look nice together. Another said it is a beautiful and her favourite couple.

Ali Ansari and Saboor Aly, who is the sister of actor Sajal Aly, are one of the hottest celebrities in the showbiz industry. They both have millions of followers on their separate pages. They share solo as well as family pictures.

Earlier, the pictures of their honeymoon in Turkey made rounds. The gallery got thousands of likes from netizens as well as their fellow celebrities.

Saboor Aly’s performance in hit serials such as Rang Laaga, Bekasoor and Gul-o-Gulzar received positive reviews from fans and critics alike. Ali Ansari has proved himself as a force to be reckoned with in the entertainment industry thanks to his work in serials with Riffat Aapa Ki Bahuein being one of them.