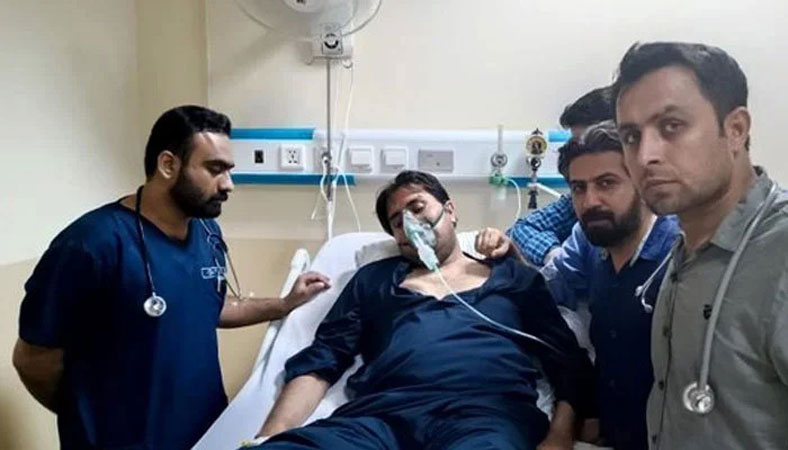 A four-member medical board constituted by the PIMS has unanimously recommended that PTI leader Dr Shahbaz Gill be monitored further and assessed by specialists. Gill is at the Pakistan Institute of Medical Sciences, where he is under treatment after being shifted to the medical facility from Adiala Jail. The medical board unanimously concluded in a post-examination report that the patient needs monitoring and assessment by cardiologists and pulmonologists. The report submitted to the court, board members Prof Lal Rehman, Dr Ali Miraj Shami, Prof SH Waqar, and Prof Shajee A Siddiqui said that Gill “may need further investigations if required”. The medical board also said “Gill is a known case of asthma since childhood and has been on inhaled bronchodilators when required, now presented with shortness of breath, body aches, including left shoulder, back, neck, fight gluteal region and left-sided chest pain”. The board further recommended 10 tests for Gill. Gill has been in police custody since August 9 when the Islamabad police arrested him in a sedition case after he passed controversial remarks on a private news channel. Last night he complained of difficulty in breathing and was shifted to the hospital from Adiala Jail. A news reports quoting PIMS sources said when the former special assistant to the prime minister was brought to the hospital Wednesday night, his electrocardiogram (ECG) report was not satisfactory.

“An increase in anxiety levels makes it difficult to breathe and the heartbeat rate starts to rise. However, Gill does not have heart-related issues,” the sources said. The medical facility said that Gill would be monitored and there are chances that he will undergo a second round of tests. They added that since his heartbeat was fast a day earlier, he will undergo an ECG today as well. Talking to the media personnel outside the hospital last night, PTI Punjab leader Ejaz Chaudhry said: “Who will be responsible if something happens to Shahbaz Gill?” Chaudhry also raised questions regarding the presence of irrelevant people in Gill’s hospital room. “There are uniformed police personnel inside the room. There are also some others who should not have been there,” Chaudhry said.

“I demand the chief justice of Pakistan (CJP) take suo motu notice of the situation at the hospital.” Chaudhry also raised the question: “Though a board of doctors has decided to keep Gill under its observation, why are police swarming his room?” “They should stay outside the room,” he said. Punjab Home Minister Hashim Dogar said Gill “faces a serious threat to his life”, and so he appeals to the higher judiciary to intervene “for the sake of human rights”. “Shahbaz Gill was subjected to physical torture in the presence of the Islamabad police. However, his condition improved during the last three days,” Dogar said. “He [Gill] has been severely depressed. His condition deteriorated when he knew he was again being remanded into police custody,” he said. Referring to the August 17 struggle between the Islamabad and Rawalpindi police forces, the Punjab minister criticised the Islamabad police, saying it shifted Gill to Islamabad under the guard of the Rangers.