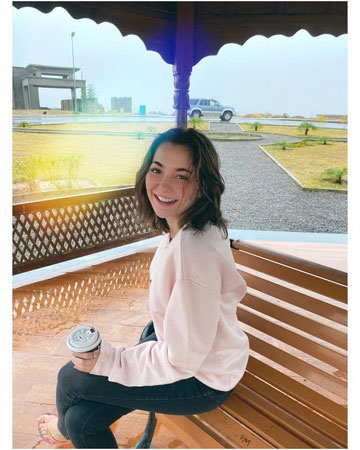 Actor and model Hania Aamir shared a video of her lip-syncing dialogue from the Bollywood film Kuch Kuch Hota Hai and it is going viral.

The viral video on Instagram showed Mere Humsafar star lip-synced “Rahul is a cheater” dialogue while getting a hairstyle similar to the film’s female lead character Anjali.

“Rahul Anjali ki phir se larai hogai,” the caption read. The video has millions of likes and heartwarming comments from the users of the social media application.

A user wrote that the actor should have played the character instead of her Bollywood counterpart Kajol while another said her Anjali-like hairstyle suits her.

With 5.6 million followers on Instagram, the actor shares beautiful and adorable clicks and videos of her personal and professional life with fans.

Recently, Hania Aamir shared an Instagram reel in which she and an unknown person were cleansing the house of rainwater with wipers. The video ended with her making a cute sad face.

She earned praise for her sublime performance as Hala Hamza Ahmad in Mere Humsafar. The serial tells the life story of her character, born to a Pakistani father and foreign mother who leaves them after her birth.

The play is directed by Neeli Zinda Hai director Qasim Ali Mureed. It is written by Saira Raza. The 33rd episode of Mere Humsafar will air on Thursday at 8pm.