‘To be prepared is half the victory’ 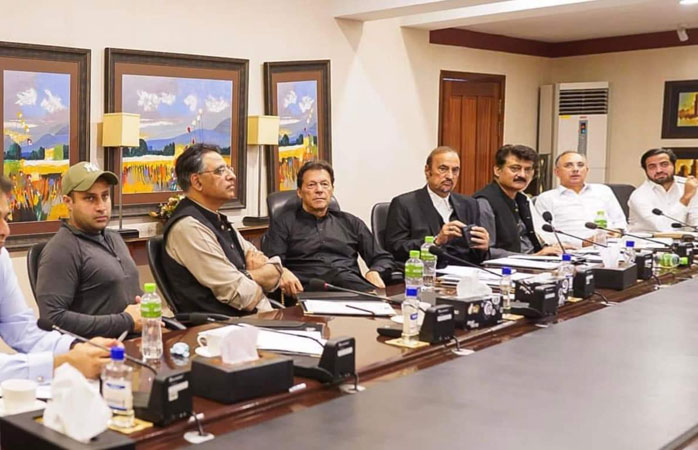 Pakistan Tehreek-e-Insaf (PTI) on Tuesday held consultations to devise a strategy for the by-election campaign in nine constituencies of the National Assembly.

In this regard, a consultative meeting was held at Bani Gala under the chairmanship of PTI supremo Imran Khan while the party’s top leadership including Asad Umar and Fawad Chaudhary also participated in the meeting.

Reports said that the strategy for election campaign for the by-elections in nine constituencies was discussed in the meeting, while Babar Awan gave a briefing about court proceedings related to Shahbaz Gill case. The meeting also discussed the federal government’s move to challenge the nomination papers of Imran Khan for by-election on nine vacant seats of National Assembly.

Reports said it was decided in the meeting that PTI Chairman Imran Khan will hold a power show in Rawalpindi on August 21. “The people of Pakistan have rejected the imported government,” Imran Khan said at the meeting, reiterating his demand for immediate and transparent elections. “Neither I bow down to anyone but Allah, nor will I let my people bow down to anyone,” he reaffirmed.

In a TV interview a day earlier, Imran Khan had claimed that arrested PTI leader Shahbaz Gill was being brutally tortured and forced to give a statement against him. “Shahbaz Gill is being tortured and forced to give a statement against me … he is also being asked how many times Lieutenant General Faiz Hameed has met Imran Khan,” the PTI chief had said. He had said a media cell in the Prime Minister’s House was working to create a divide between PTI and Pakistan Army.

Imran Khan had also claimed that everything that happened with Gill was a conspiracy to “scare PTI supporters” and “create an impression that PTI is against the army and martyrs”.

“This propaganda campaign was created in the prime minister’s cell,” he had alleged, adding that the closure of ARY News was also part of the conspiracy. “This is all their plan to shut my supporters,” the former prime minister had pointed out, continuing that the same was being done with YouTubers who spoke up in support of him. “Their aim is to make a treason case against us and create misunderstanding between the army and PTI because we are the only party that represents all of the provinces.”