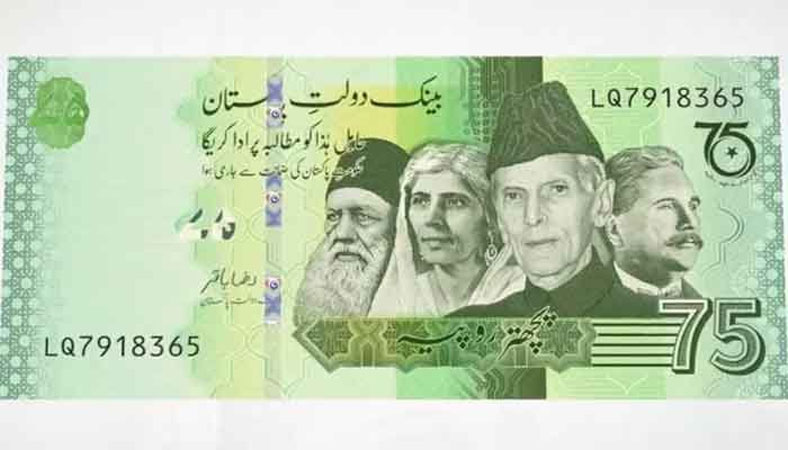 The State Bank of Pakistan has introduced the Rs75 commemorative banknotes in recognition of the nation’s diamond jubilee as Pakistan celebrates its 75th year of independence.

The unique note was first announced by the central bank earlier today on Twitter, along with the statement, “The note will be available for public issue starting September 30, 2022.”

The Quaid-e-Azam Muhammad Ali Jinnah, Sir Syed Ahmad Khan, Allama Muhammad Iqbal, and Mohtarma Fatima Jinnah images appear on the emerald green banknote appropriately. The portraits represent the freedom fight of Pakistan’s founding fathers. Similarly, the reverse vignette, drawn by Sara Khan, depicts the national animal Markhor and the national tree Deodar, emphasising the significance of conserving our environment and Pakistan’s distinctive flora and wildlife. Following the recommendations of the SBP Board, the federal government authorised the notes in compliance with the SBP Act 1956.

The note also has raised printing that can be felt by running fingertips across the portraits, a watermark of Quaid-e-portrait Azam’s and 75 numeral, Pureimage security thread with pulsating holographic rainbow effect, and micro-lettering of 75 number, among other security measures.