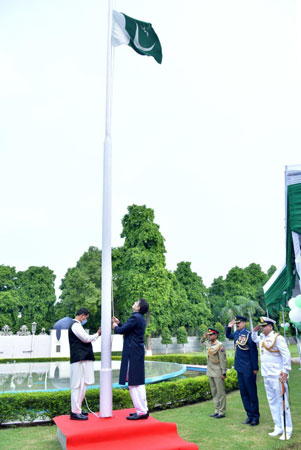 High Commission for Pakistan, New Delhi on Sunday celebrated the 75th anniversary of the Independence of Pakistan with patriotic zeal and fervor. Chargé d’Affaires Aftab Hasan Khan raised Pakistan’s flag to the tune of the national anthem at an elegant flag-hoisting ceremony held at the Chancery’s Lawns. Officers and staff of the High Commission, along with their families, were present on this auspicious occasion. Special messages from the President and the Prime Minister of Pakistan on the 75th Anniversary of independence were read out to the audience.

Subsequently, in his remarks, Aftab Hasan Khan, Chargé d’Affaires, congratulated Pakistani nationals on the auspicious occasion, and underscored that freedom is a great and invaluable blessing for any nation.

The Chargé d’Affaires paid homage to the father of the Nation, Quaid-e-Azam Muhammad Ali Jinnah, and other great leaders of the freedom movement who had led a historic struggle for the establishment of an independent state for the Muslims of the Subcontinent. He highlighted that, today, Pakistan was a proud nation on the path of development and prosperity.

“Pakistan has a vibrant and dynamic population which is playing a pivotal role in the country’s progress. Standing shoulder to shoulder with them are our valiant armed forces who have remained at the forefront for the security of our motherland,” he underscored. “The last 75 years are a testimony to the fact that Pakistan has achieved tremendous progress and success in all spheres of life even in the face of grave challenges. Pakistan will continue to play its responsible role for peace, stability and development in the region and the World,” he added.

The Cd’A stressed that Pakistan had always desired for peace in the region and beyond. He underscored that Pakistan wanted peaceful relations with all its neighbours, including India. However, for durable peace and stability in South Asia, it was essential to resolve the core issue of Jammu & Kashmir in accordance with the UN resolutions and the wishes of the Kashmiri people, he emphasized.

The students of Pakistan High Commission School gave a performance on national songs and delivered speeches highlighting the historic struggle for the creation of Pakistan.

At the end of the ceremony, Chargé d’Affaires, Mrs. Erum Gillani, distributed prizes and gifts among the students and teachers of the High Commission School.

A special cake was also cut by the Chargé d’Affaires, along with his spouse as well as other officers of the Mission, on this momentous occasion. In view of the Covid-19 pandemic, strict compliance of standard operating procedures was ensured.