* In Britney's original post, which featured a home video of the pop star, she had shared some words of wisdom she once heard from JLo 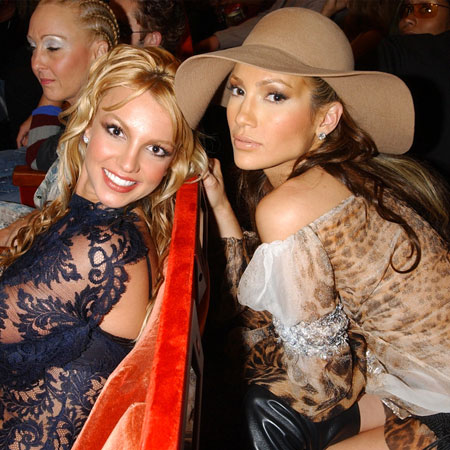 Jennifer Lopez has got Britney Spears’ back. On Aug 13, the “Let’s Get Loud” singer reposted on her Instagram Story a now-deleted post shared by the fellow pop star, while including a photo of the two posing together at the 2001 MTV Video Music Awards.

In Britney’s original post, which featured a home video of the pop star, she had shared some words of wisdom she once heard from J.Lo. “As Jennifer Lopez once said ‘You look right down that camera and tell every little girl in the world to get loud and never ever back down to giving light to injustice’,” Britney wrote on Instagram, along with the video. “I’m here to share that freedom is a state of mind!”

Britney also wrote, “In a world where you have the right to use your feet…heart… mouth… eyes…and body…to express yourself however you may !!! Declaration of INDEPENDENCE … for equality and to be equal !!!”

The supportive social media exchange comes amid Britney’s ongoing feud with ex-husband Kevin Federline-who was married to Britney from 2004 to 2007.

In a recent interview with ITV News the 44-year-old made the bombshell allegation that the former couple’s sons Sean Preston Federline, 16, and Jayden James Federline, 15 “have decided they are not seeing” their mother right now,” according to the Mail on Sunday, which published excerpts.

According to the newspaper, the former backup dancer also signaled that the boys were negatively affected by Britney’s Instagram activity. The singer often posted censored naked photos of herself on the platform.

After Kevin’s comments were made public, Britney-whose near 13-year conservatorship was terminated in November-fired back on her Instagram Stories, calling the situation “hurtful.”

“It saddens me to hear that my ex husband has decided to discuss the relationship between me and my children,” she wrote on Aug. 6. “As we all know, raising teenage boys is never easy for anyone.”

She continued, “It concerns me the fact that the reason is based on my Instagram … it was LONG before Instagram … I gave them everything.”

That same day, Britney’s husband Sam Asghari came to his wife’s defense, denying the rift between the pop star and her kids and insulted Kevin as a father.

“There is no validity to his statement regarding the kids distancing themselves and it is irresponsible to make that statement publicly,” the 28-year-old wrote on his Instagram Story on Aug. 6. “The boys are very smart and will be 18 soon to make their own decisions and may eventually realize the ‘tough’ part was having a father who hasn’t worked much in over 15 years.”

He also seemingly threw shade at the fact that Kevin receives child support from Britney, adding that his “gravy train will end soon [which] probably explains the timing of these hurtful statements.”

Days later Kevin punched back and appeared to post videos from nearly four years ago on Instagram of who appeared to Sean and Jayden arguing with their mother. “I can not sit back and let my sons be accused in this way after what they’ve been through. As much as it hurts us, we decided as a family to post these videos,” Kevin captioned the since-deleted clips on Aug, 10. “I hope our kids grow up to be better than this.”

After the footage was shared, Britney’s lawyer Mathew Rosengart called Kevin’s action “cruel” “Britney has faithfully supported her children and she loves them dearly,” Rosengart said in a statement to E! News on Aug 11. “Whether he realizes it or not, Mr. Federline has not only violated the privacy and dignity of the mother of his children, he has undermined his own children, whose privacy he should protect. Putting aside his ITV interview, Mr. Federline’s ill-advised decision to post an old video of his 11 and 12 year old children was cruel, bottom of the barrel stuff.”