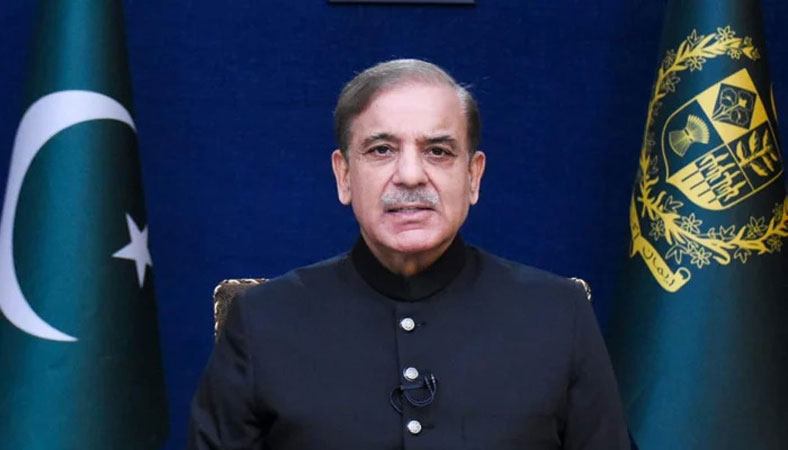 Prime Minister Shehbaz Sharif Saturday saluted the innumerable Pakistanis who sacrificed their lives for Pakistan and felicitated Pakistanis across the world on the occasion of the 75th Independence Day of Pakistan.

In a televised address to the nation, he said history was witness that Pakistan was created after millions of Muslims sacrificed their lives.

“But today mere felicitation is not enough. In the past we just celebrated the Independence Day but did not make enough efforts to achieve the goals of independence so that souls of the Quaid and martyrs are satisfied and in comfort.” He said Pakistanis enthusiastically and with great joy celebrate the Independence Day of their country and the anniversaries of Quaid-e-Azam and Allama Iqbal, adding, “Today we have to accept the truth with open heart that we cannot give to our younger generation, what it truly deserved.”

He said Pakistani nation was bestowed with great blessings of Allah and it was guided by the life of Quaid-e-Azam and thoughts of Allama Iqbal. He asked why such a nation was still striving to find its destination.

Pakistan was faced with multiple challenges and the biggest of it was the economic challenge, he pointed out. The PM said today’s crisis was wavering of the self-dignity and self-confidence of the nation.

Shehbaz Sharif told the nation that there is no concept of a nation’s independence without economic self-reliance. He reiterated his call for the formation of a “charter of economy”, saying that time has come for Pakistan to head in the right direction. “We should keep national interest above personal interest […] as real political leadership does not look towards the next elections, but at the future of the next generation,” he said. “Most importantly, we will need to revive the passion that led to the creation of Pakistan,” he said, noting that this passion will lead to the establishment of a great nation.

The prime minister said that the government has banned unimportant imports which resulted in the local currency’s recovery against the US dollar. He added that the government has decided to start solar projects instead of importing oil and gas. This will provide the nation with cheap electricity, he added. The prime minister’s call for economic stability comes as the cash-strapped nation desperately seeks financial assistance from friendly countries and the International Monetary Fund (IMF). The country’s foreign reserves held by the State Bank of Pakistan were recorded at $7,830.3 million, down $555 million compared with $8,385.4 on July 29, data released by the SBP on Thursday showed, which can cover fewer than 1.12 months of imports.

Shehbaz Sharif-led government came into power in April after the ouster of PTI Chairman Imran Khan – and since then, the incumbent rulers have been trying to stabilise the economy. Without naming his party’s arch-rival PTI, PM Shehbaz said that the nation is facing a crisis of anger and hatred spread in an attempt to divide the nation. Economic dependence has become Pakistan’s identity, which our elders never would’ve thought. “As a prime minister, this has been my harshest experience,” he added.

PM Shehbaz said that the government has worked day and night to lead the country out of this crisis and prevented Pakistan from getting default. “The previous government took the highest debt of Rs43 billion dollars in the history of Pakistan which forced the incumbent government to take loans from friendly countries,” he said while questioning Imran Khan’s “haqiqi azadi”. He shared that the payment of interest on the loans taken by the government has also become impossible.