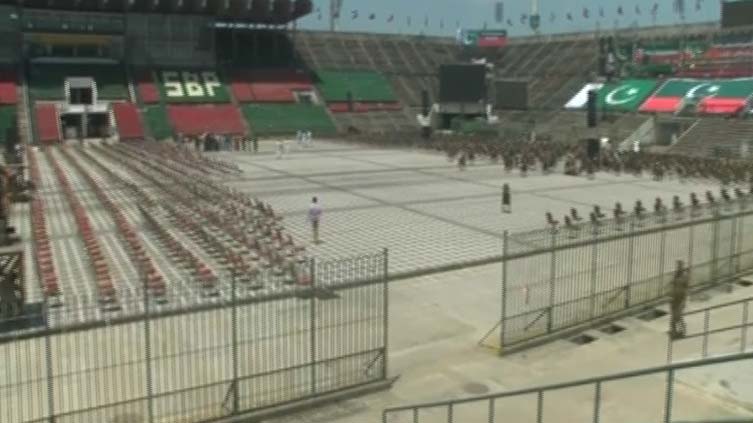 PTI is all set for ‘Haqiqi Azadi Jalsa’ at Lahore Hockey Stadium today. As the Pakistan Tehreek-i-Insaf (PTI) party prepares to hold its power show in Lahore to commemorate the nation’s 75th Independence Day, the stage has been set and the roads leading to Lahore’s National Hockey Stadium have been decorated with PTI flags.

Party members and supporters from all around Punjab are anticipated to attend the event, which will likely start at 7:00 in the evening. The former prime minister and PTI Chairman Imran Khan will address to the gathering.

Although the leader of the Pakistan Muslim League-Nawaz (PML-N) and Special Assistant to the Prime Minister (SAPM), Ataullah Tarar, filed a lawsuit against the PTI’s public gathering at the hockey stadium yesterday, claiming that the venue was intended for a specific use.

Ataullah Tarar, the leader of the Pakistan Muslim League-Nawaz (PML-N) and Special Assistant to the Prime Minister (SAPM), petitioned the Lahore High Court (LHC) against the PTI’s public gathering at the hockey stadium yesterday on the grounds that the location should not be used for political gatherings. However, he was unsuccessful in getting the court to order the PTI not to hold its function there.

The astroturf in the stadium had also been ruined.

The petitioner had claimed that PTI’s decision to hold a gathering in the hockey stadium was a violation of Articles 3,5,9,16,24, and 24 of the constitution.

Asad Umar, the secretary general of the Pakistan Tehreek-e-Insaf, has meanwhile urged the public to “join the event and sing the national song with Imran Khan at 12:00 am to welcome the Independence Day.” He called for massive attendance at the rally

He urged Pakistanis both within and outside of the country to join in the festivities in a tweet.

Earlier, the PTI shifted the venue of its ‘Haqeeqi Azadi jalsa’ from the Parade Ground to the Lahore Hockey Ground.