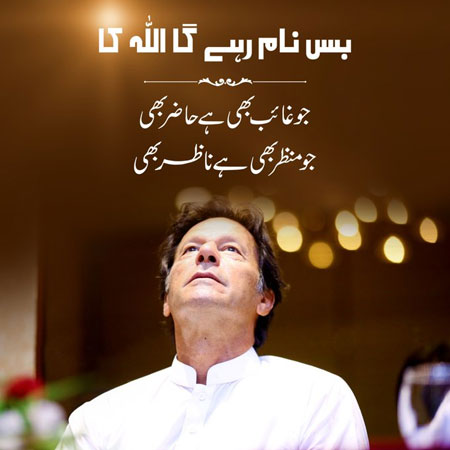 Former prime minister and PTI Chairman Imran Khan on Friday appealed to the public to attend his party’s Independence Day celebrations on Saturday (today), where he is also set to take people into confidence over his journey towards ‘Haqiqi Azadi’.

In a video message released on Twitter, the former prime minister asked people to attend his party’s rally at the National Hockey Stadium in Lahore to celebrate 75 years of Pakistan’s independence. “Why do you have to come? Because we have to celebrate our 75th birth anniversary and along with that I have to take you on my journey of Haqiqi Azadi [true freedom],” he said. “We have reached the last stage of our journey,” he added.

The PTI chief told his followers that they have to make the country, which was made in the name of La Ilaha Illah Allah, into a nation that does not bow before anyone but Allah. “I have invited all of you for this and everyone has to participate with me. We will celebrate and decide how to reach the ideology on which Pakistan was made,” he maintained.

The PTI had initially scheduled to hold the rally at the Islamabad Parade Ground. However, it was later shifted to Lahore amid reports of TLP also holding a rally on the same day ion the federal capital.

However, Azhar Mashwani of the PTI had said that the decision was taken by PTI Chairman Imran Khan after the party learnt about the federal government’s “insufficient” plans for celebrations on Independence Day.

“The proud Pakistanis of Lahore will celebrate the 75th Independence Day in a grand manner at Hockey Stadium Lahore,” he said. A day earlier, Imran Khan had told a private TV channel that he would give a roadmap and strategy to his people in the Lahore public gathering and tell them how a nation gets real independence and freedom. He maintained that 26 years ago, he said he would never let his nation bow to anyone and make it a respectable and self-reliant people.