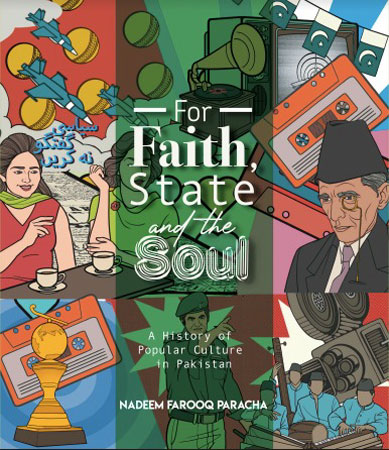 The book is now available in bookstores across Pakistan and online for audiences across the world. For Faith, State and the Soul chronicles 75 years of the country’s cultural traditions, initiatives and victories. Divided into pre partition and post partition, it chronicles decades leading up to 2020s, the book creatively illustrates the evolution of popular culture within Pakistan over the decades, while authoring the socio-political events which have navigated this culture over the years.

“Popular culture emerges from the people for the people. It is organic. Unfortunately, its history and evolution hasn’t been very well documented in Pakistan. My book attempts to explore this evolution as a way to celebrate it and more so, understand what drives it,” said Nadeem Farooq Paracha on the launch of the book.

CEO, Markings Kiran Aman said; “We are delighted to publish NFP’s work, reflective of his signature satire and his unique lens on the history of Pakistan. For Faith, State, and the Soul: A History of Popular Culture in Pakistan is a fascinating journey through Pakistan’s popular culture, relevant across generations.”

Nadeem Farooq Paracha is a widely published author and historian. He was student activist in the mid -1980s before joining journalism in 1990, first as a political reporter and then as a cultural critic. He was accepted as a Research Scholar by the International Forum for Democracy in Washington DC. Paracha has authored five best-selling books on the social and political history of Pakistan. For Faith, State, and the Soul: A History of Popular Culture in Pakistan is his sixth book.

Markings was founded by Kiran Aman in 2010 with a vision to nurture a platform that encourages a diversity of expression. Now in its twelfth year, Markings continues to provide avenues for giving voice to such expressions through words, pictures, performance, and other alternate styles of communication having launched many critically acclaimed and award winning titles in the past.