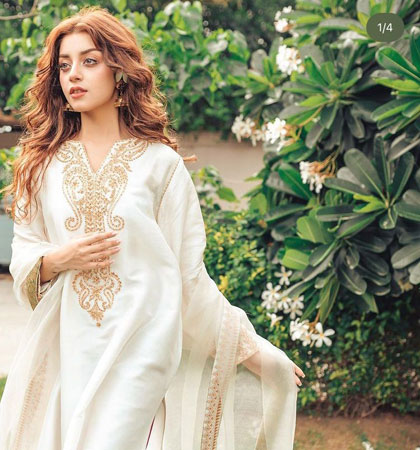 Actor Alizeh Shah is one of the most followed celebrities on social media platform.

She shares personal and professional pictures and clips with her millions of fans which become hit.

She shared pictures of her photoshoot. She was wearing a stylish embroidered shalwar kurta.

The caption read, “Till the end of time”

The viral pictures of the Dil Mom Ka Diyaa actor got rave reviews. It had thousands of likes and countless heartwarming comments.

An Instagram user called her the most beautiful girl while another wrote may she keep smiling and shining till the end of time.

Earlier, Alizeh Shah posted pictures of her in a colourful kurta for a dashing photoshoot. Her caption read, “Thought you got all you came for lover lover.”

The celebrity’s pictures were well received by the users of the social media application. They complimented her looks with their comments.

Alizeh Shah has proved her mettle in the drama industry. Her stellar work in super hit serials Dil Mom Ka Diya, Mera Dil Mera Dushman and others earned her praise from audience and critics both.

The celebrity had previously recalled her struggle in dealing with social anxiety. She said her words have been misinterpreted in the past. She added she does not like to speak even if there is something to be discussed.