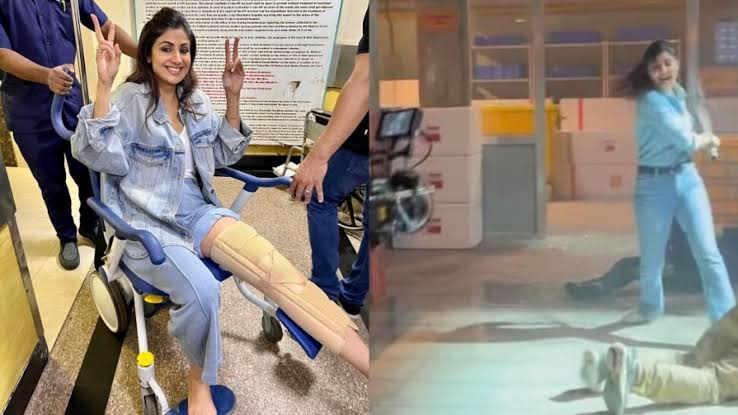 The actress posted a picture of herself in a wheelchair with one leg propped up on her official Instagram account. Despite her damage, the actress strikes a lively pose for the camera and displays her gorgeous smile.

Intriguing sneak peeks from the sets of his upcoming movie “Indian Police Force” have been released by director Rohit Shetty. In recent weeks, he and actors Sidharth Malhotra, Shilpa Shetty, and Nikitin Dheer have worked on an exciting action scene.

Shilpa uploaded a photo of herself leaving a hospital with her cast-covered left leg.

They said, Shilpa wrote, roll camera action—”break a leg!” I took it literally. I’ve been out of action for 6 weeks, but I’ll be back soon, stronger and better. Meanwhile, dua mein yaad rakhiye ga.Prayers always work. With gratitude Shilpa Shetty Kundra.

Rohit had previously stated, in reference to this ambitious series, “We have always seen these big shows from Hollywood and the West. But I wanted to create a show in India that could compete with them.

I’ve always wanted to create a significant international production with Indian roots that can leave a lasting impression on the world stage. ” I had always wanted to work with Rohit Sir, Sidharth had said. I was merely moving when the slow-motion scene from the teaser for the Indian Police Force appeared.

Rohit Sir’s vision and execution are entirely responsible for the cinematic experience and the larger-than-life feeling. Our actors have made it simple through their team’s efforts. “

Sidharth Malhotra, Vivek Oberoi, and Shilpa Shetty will all appear in this movie, directed by Rohit Shetty.