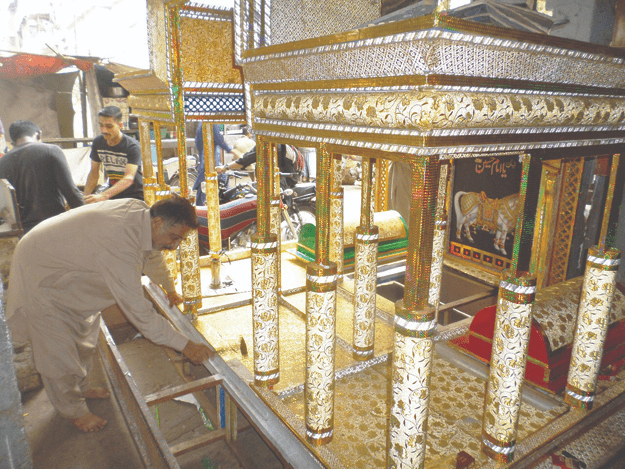 The Hindu community of Karachi takes part in the Muharram processions but in their own way.

Josh Malihabadi said, “Let humanity awaken, and every nation will claim Hussain as their own.”

Instantly, Muharram ul Haram began in Karachi, and the Hindu and Sikh communities in Narayan Pura were busy preparing Taziyas and Alam.

“Even though we are Hindus, we deeply respect this day,” said RajuKhem Jee. Another Hindu affirmed that they had seen this since they were adults.

According to a citizen, Bhola Bachan, “The public starts giving Niaz from the 5th of Muharram in Narayen  Pura, but it increases on the 9th and 10th of Muharram.”

“When I was young, our elders used to prepare the Taziya, so I used to sneak a look at their faces from under them. When the procession used to pass our area, I used to wonder how they would make the Taziya considering how beautiful it was,” Resident Ameet Partap recalled. “I feel very blessed to get an opportunity to provide this service now. People know this Taziya by the name of dul dul. Dul dul in Sankrit is called Zuljanah. “

“This Taziya stays out for 2 days, mostly on the 9th and 10th of Muharram, but it takes us about one year to get it ready. We slowly do the work to complete it, and our actual preparation starts before Eid- ul- Adha.”

For many years now, Taziya has been reclaimed from the same position, and the Hindu community has shown its love and constancy for the place of Imam e Ali.

The Taziya leaves Narayan Pura for the showcase as part of a procession and then returns on the night of the 9th Muharram.

“We have been witnessing this for decades,” said another local. “I was only ten, and now I am 55 years old. I still bear witness to this. “

This tradition of preparing Taziyas for Ashura continues in the Old City of Narayan Pura.