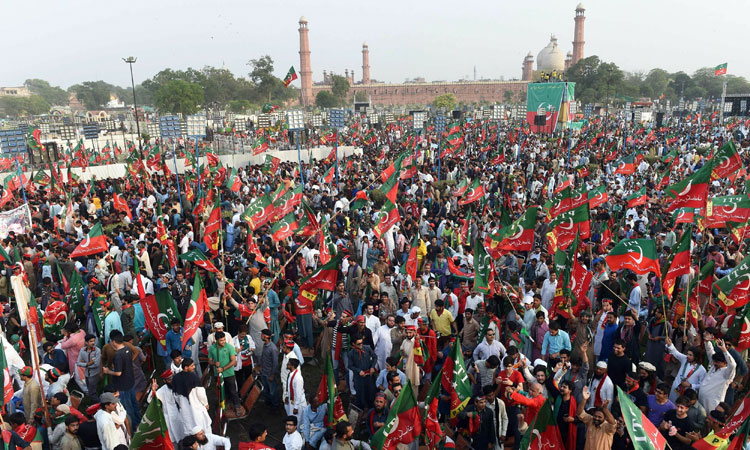 Following the Interior Minister Rana Sanaullah’s warning that the PTI will face a fate worse than May 25 if its August 13 rally led to chaos in the federal capital, the PTI has shifted the venue of its ‘Haqeeqi Azadi jalsa’ from the Parade Ground to the Lahore Hockey Ground, party’s focal person Azhar Mashwani said on Monday. “The decision was taken by Chairman Imran Khan in a meeting today,” he said in a statement. He said the development came after the party learnt about the federal government’s ‘insufficient’ plans for celebrations on Independence Day. “[The] proud Pakistanis of Lahore will celebrate the 75th Independence Day in a grand manner at Hockey Stadium Lahore,” he said. Mashwani added that the ex-premier will attend the rally and address supporters as well. Separately, a tweet on PTI’s official Twitter account said that it will celebrate Independence Day “in a grand manner” in Lahore. Meanwhile, in a press conference at Bani Gala earlier in the day, PTI leader Omar Ayub said that party workers had visited the Pindi Cricket Stadium and Liaquat National Bagh. “We were told that the stadium just got new pitches while plantation was underway in the park.” He said the PTI had been given permission for the rally at Islamabad’s Parade Ground.

“But at the last moment, we found out that the Tehreek-e-Labbaik Pakistan wanted to hold a protest there and it could have created problems. “Hence, we came to the conclusion that Lahore is the best location [for the rally],” he said, adding that ground was spacious and could fit all of Imran’s supporters.

On Sunday, the PTI chief had said he would announce a strategy to “counter this fascism” during the August 13 rally.

Former prime minister and PTI chairman Imran Khan chaired a meeting of the party’s political committee. During the meeting, it was decided that the August 13 rally will be held in Lahore instead of Islamabad. On Sunday, the PTI chairman in his meeting with party leader and legal expert Dr Babar Awan in Bani Gala said that early election cannot be stopped.

Both the leaders discussed political and legal matters in the meeting. Consultations were held related to the PTI power show on August 13. Babar Awan also apprised the PTI Chairman over ongoing legal issues.

On this occasion, the former premier said with the PTI power show on August 13, there will be beginning of the revolution. The people will not back down from the demand for clean and transparent elections, he said.

Babar Awan said that the defeated group in the political field is running away from the election. Fake cases and false investigations will not become public narrative, he added. Awan went on to claim that now PTI will get two-third majority in the general election.

Meanwhile, the former PM had also announced that he would unveil his plan of action to counter ‘fascism’ at his party’s power show in Islamabad “six days from now” on August 13. Sharing his thoughts on Twitter, the former prime minister lashed out at the coalition government, saying that a group of thieves have been brought into power through US conspiracy.

He penned, “People of Kufa, despite knowing our beloved Prophet (PBUH)’s Grandson was on the path of truth, did not come to help out of fear of Yazid & allowed the greatest tragedy of Islam to happen.”

PTI Chairman also penned, “Every era has its Yazids. Pakistan is facing Yazidiyat (fascism) today in the form of rule by a cabal of crooks and their handlers brought to power through US regime change conspiracy.”

The former premier posed the question and said, Will our ppl bow down before this conspiracy in fear or, as a nation, face up to the challenge? On 13 Aug at our Haqeeqi Azadi jalsa I will announce our plan to counter this fascism.