Azhar Javed’s short stories are based on real accounts 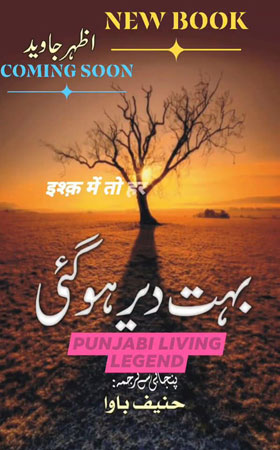 Writing a short story based on real happenings is a difficult task especially if written in a fluent and easy diction. Azhar Javed’s short stories book ‘Buhut Dair Ho Gayi’ (It’s already too late) is being referred to here. Now comes the million dollar question whether the credit should be given to the writer or to the translator Haneef Bawa. This reviewer recommends that both should share the booty. Normally one comes across writers getting their works translated from Urdu to Punjabi but it is the other way round this time.

Another issue that matters is the selection of themes of the stories. The short story titled the same as the title of this book is based on the writer visiting to meet a producer which is a rare phenomenon as he is not accustomed to visit this fraternity for making friends with for want of work. He hears his name being called from behind while he is walking towards the producer’s room. He turns back and looks at a middle aged lady with white streaks in her hair. On his next visit he finds the same lady in the make-up room initiating a conversation. The writer recalls his young days when he and this lady were friends. He girds up his lions and visits the lady’s house one evening where he is welcomed and taken to the lady’s bedroom. Upon looking at the lady and a child calling this lady as Naani, he wakes up from a deep slumber and leaves the house abruptly with the comments ‘Buhut Dair Ho Gayi’ (It is already too late). Another short story titled ‘Aik Rulane Waala Latifa’ (a joke that made you cry) is very sad story about a joke the writer shared with his friends. It is about a man sitting on the edge of a pond with a fish catching rod in the water to catch a fish. A man passing close by observes that the pond did not have fish and that he was wasting his time. On way back he finds the fish catcher man still not deterred and says that he knew there were no fish to catch but he didn’t lose hope. Listening to this hackneyed joke everybody started leaving the writer’s office. The host let alone started thinking about the letters he received from writers. He recalls a lady who used to send her stories regularly and in return just sympathetic words of solace. All she wanted was that the writer addressed her lovingly and when the writer did that she stopped sending him letters. Her last story published in Punjabi mentioned address from America. The writer now understood that she wanted her last love letter to establish her victory before she married a guy in America.

After reading 25 stories in the book under review one notices two things; one, that Azhar Javed was not short of any themes for his stories, two, he used metaphors and gave a magical touch to his charismatic characters and three, had showered his love on his friends and colleagues who gathered around his charismatic personality in his office located in Bhagwan Street, Old Anarkali, Lahore from where he published his monthly journal Takhleeq which has entered 54th year of consistency; a noble cause continued by his son Sonaan Azhar Javed after Azhar Javed’s demise. Azhar Javed was a versatile person; a poet, writer, translator (Bulgarian short stories in English), personality’s sketches writer (poet Sahir Ludheyanvi (Nakaam Muhabbat), Benazir’s martyrdom (Maut Mere Ta’aqab Main), Rabia Basari (Soofi woman). His poetry book ‘Gham-e-Ishq Gar Na Hota and Punjabi short stories ‘Bari Dair Ho Gayee’ 2004 were well received. His stories have been extracted from the social attitudes. Hanif Bawa hailing from Jhang Clan of writers has tried his best to keep the essence of the story intact while translating from Punjabi to English.

Late Hameed Akhtar had a very clear memory and shared his views on Azhar’s poetry not only in his introduction to the book but also during the largely attended gathering invited by ‘Idara-e-Ahl-e-Sukhan’ to inaugurate the book Nakaam Muhabbat on Sahir Ludheyanvi, on April 11, 2006 at a local hotel in Lahore. He termed Sahir a very lucky poet. Hameed stated that Sahir had never desired to become a great poet but he still managed to attain a name both in the literary field as well as in the Indian Film scene, the latter being his ambition. In a book review This reviewer had mentioned that Hameed had mentioned that before the creation of Pakistan when Sahir resided in Lahore, he had to accompany Sahir to the Red Light Area some times where Sahir never attempted to desire for any physical relationship with any of the girls residing there. The reason must have been some psychological disorder as discussed in the book. Sahir would often end up in some unsuccessful love affairs and each time came out with some beautiful poems emerging out of his mental state of affairs. Here Sahir’s couplet ‘Lo Aaj Hum Ney Tor Diya Rishta-e-Umeed/Lo Ab Kabhi Gila Na Karain Gey Kisi Sey Hum’ is very pertinent. Azhar Javed sums up the incentives he gets from his everyday writers he comes across or knitting his stories in the last story of the book under review titled ‘Besawal Batein’ (conversations without questions). He recalls his phone calls to one of his contributors who kept on crying during her call. She disclosed that she was about to get married but she didn’t want it as she hated men. Her father had mistreated her mother when she gave birth to a girl. The writer avoided giving hackneyed response that she would end up happy after she compromised with the new situation. Dr Haroonur Rasheed Tabasum observes in the introduction to the book that Azhar Javed has the knack to winding up his stories in a unique manner. His stories are knitted well and the narration, strong! Sonaan has done well to get his father’s stories translated and published as the translator had stayed as close to the original text as possible.