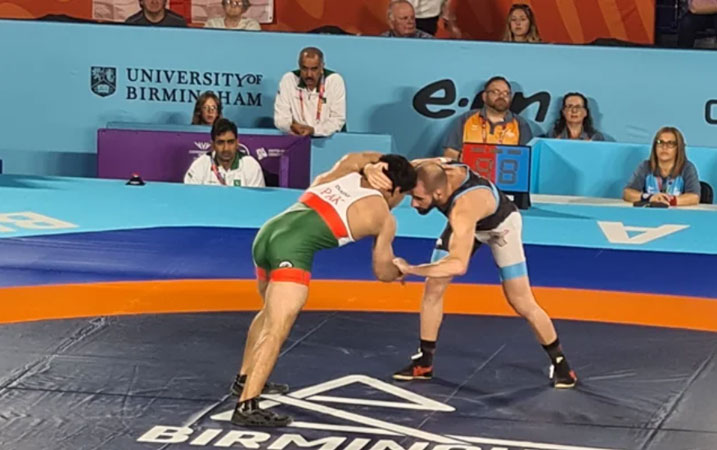 BIRMINGHAM: After knocking out Malta’s Adam Vella in just three minutes, Pakistan’s wrestler Inayatullah has qualified for the quarter-finals of the Men’s Freestyle 65kg wrestling event at the Commonwealth Games. Inayat followed the footsteps of champion wrestler Inam Butt and dominated his opponent, national media reported. After taking 10 straight technical points, Inayat was declared the winner. Vella remained helpless and he failed to score a point. Inayat was to meet Nigeria’s Amas Daniel in the quarter-final match later in the day. Moreover, Pakistan’s wrestler Inam was to compete against Scotland’s Kieran Malone in Men’s Freestyle 86kg wrestling event.

Pakistan’s Zaman Khan was to directly play the quarter-final against Marie’s Kensley Anthony of Mauritius in the Men’s Freestyle 125kg wrestling event. On Thursday night, Pakistan suffered a crushing 7-0 defeat at the hands of six-time Commonwealth Games champions Australia, who maintained their 100% record in the final Pool A match at Birmingham.

In order to ruin the South African party Pakistan needed to win this game by two goals or more, and to their credit they started on the front foot. They could not find a way through however, and Blake Govers hammered home just how tough this would be for Pakistan by opening the scoring in the 12th minute. The second quarter only served to make the already extremely tough Pakistan challenge almost impossible when Jeremy Hayward doubled the Kookaburra’s lead. A strong period for the Aussies only yielded the one goal but put them firmly in the driving seat.

Any lingering hopes of a Pakistan comeback were firmly crushed in the third quarter, as goals from Hayward and Tom Wickham just two minutes apart extended the lead to 4-0. News Desk Australia saved their most prolific quarter for the final 15, adding three more goals from Wickham, Jacob Anderson and Nathan Ephraums.

A thoroughly professional performance from a side looking to make it 7 out of 7 gold medals at the Commonwealth Games. The result of the game means Pakistan will take on Canada in the 7th/8th classification match, while Australia will play hosts England in the semi-final on Saturday.