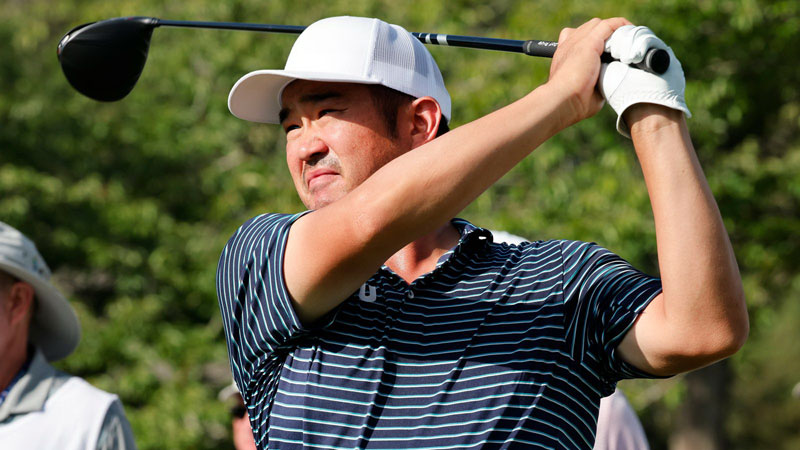 WASHINGTON: John Huh fired a career-low nine-under par 61 to seize a two-stroke lead after Thursday’s opening round of the US PGA Tour’s Wyndham Championship.The 32-year-old American made seven birdies and an eagle in a bogey-free round to grab a two-stroke lead over South Korean Im Sung-jae at Sedgefield Country Club in Greensboro, North Carolina.

“I’m actually surprised I’m at the top of the leaderboard,” Huh said. “I didn’t really feel my game was there, but it’s one of those days where I took advantage of some good shots and good breaks.”Shoot my career low, it’s kind of weird. Sort of mixed feeling, but I’ll take this any day.”

Huh’s best prior PGA rounds were 62s at the 2013 Wyndham and 2016 Shriners Children’s Open.Huh, whose only PGA title came at the 2012 Mayakoba Classic after an eight-hole playoff, sank a nine-foot birdie putt on the first hole and reeled off five consecutive birdies starting at the fourth hole.

“I hit it close enough, gave myself a chance,” Huh said. “I put it pretty much inside 10 feet and made all that.”At the par-5 15th, Huh drove the green in two and sank a 38-foot eagle putt with some help from the flagstick. “I knew it was going to be a quick one,” Huh said. “I hit a good stroke, hit my line. I got lucky that it hit the flagstick and went in the hole. It was just one of those holes where you hit your spot and hopefully it goes in.”

Huh added a birdie putt from just inside four feet at the 17th and closed with a par from about the same distance. Huh began the day 111th in FedEx Cup points with only the top 125 after Sunday’s final round qualifying for the PGA playoffs that begin next week in Memphis. “I know what’s on the line. I know how important this tournament would be,” Huh said. “At the same time you’ve just got to go and play and I think I did that really well.” Im eagled both par-5 holes on his way to a 63 to stand second. His only equal or better rounds came in winning last October’s Shriners Children’s Open.

South Korean Kim Joo-hyung opened with a quadruple bogey 8 but rallied to shoot 67, becoming only the third PGA player since 2003 to register a sub-par round after so poor a start. “I was laughing. There was nothing I could do,” Kim said. “I was only laughing because it was the first hole of the day and it was probably the worst start I’ve ever had in my career. “All I could do was laugh because just some shots I hit there were pretty awful. But for some reason I felt calm. It was one bad hole and I just told myself, ‘I can still shoot under par today’ and somehow I did.”