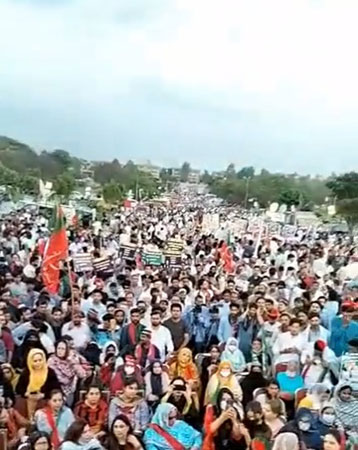 A large number of PTI supporters and lawmakers on Thursday reached the Election Commission of Pakistan (ECP) office in Islamabad and staged a protest. PTI leaders included Asad Umar, Fawad Chaudhry, Shiekh Rashid, Pervez Khattak, Azam Swati and others. The PTI leaders handed over a memorandum against the Cheif Election Commissioner (CEC) Sultan Sikandar Raja to Election Commission of Pakistan (ECP) officials. Speaking to the media, Asad Umar said that the electoral body is no longer functioning as a state body, but as a subsidiary of the Pakistan Democratic Movement (PDM) coalition.

He urged the chief election commissioner to resign and added that two provincial assemblies have passed resolutions against ECP and have cited a lack of confidence in the body, a private TV channel reported. The protest also saw the participation of a sizeable number of lawyers from the PTI. The party also handed over a letter of protest to a representative of the ECP. The ECP earlier called in a meeting in Islamabad to discuss the PTI’s scheduled protest. Under the chairmanship of Chief Election Commissioner (CEC) Sikandar Sultan Raja, Deputy Commissioner Islamabad Irfan Nawaz Memon briefed the meeting about the security situation in the capital. During the meeting, it was decided that PTI leaders will not be permitted to the election commission’s premises amid security threats. “No one will be allowed to enter the ECP,” said Deputy Commissioner Memon. Later, the time and venue of the protest scheduled by the PTI was changed. The party had called for a protest at 3pm at Nadra Chowk, near the ECP building. However, the venue was changed to F9 Park and at 6pm.