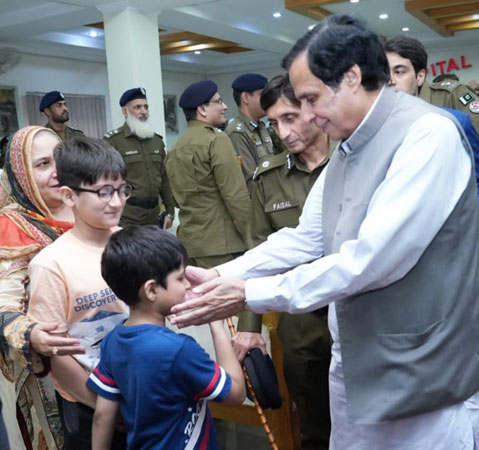 Chief Minister Punjab Chaudhry Parvez Elahi met with the families of police martyrs at the police lines and expressed solidarity with them on police martyrs day on Thursday. They took selfies with Parvez Elahi and the CM also invited them for lunch.

While addressing the gathering, the CM reminisced that he had visited police lines 18 years ago; and today, he has come to the police lines for the second time. The announcements made by me for the police welfare, at that time, were not implemented by Shehbaz Sharif; he regretted and maintained that only the heirs of police martyrs could imagine the agony they go through. He lamented that Shehbaz Sharif only show-off things for some momentary gains. Parvez Elahi announced a four times increase in the pensions of martyrs’ families and added that their children will be provided with an opportunity to study free of cost in elite institutions. Similarly, risk allowance will be given to police from constables to the IGP; he stated and disclosed that a separate package will be devised for the ladies’ police. A follow-up meeting has been called next week for implementing the announcements made by me, he mentioned.

The burden on the families of the martyrs during the eid festivities cannot be estimated; therefore, they will be given a special cash package on eid, he further announced. I feel the pain of these families and will not allow the reduction of resources for the police; he stressed and concluded that the police should also strive to improve the institutional prestige of their institution. IG police and martyrs’ children also spoke on this occasion and prayers were offered for police and army martyrs of the helicopter crash.

Talking to the media, the CM said that pensions of martyrs’ families will be quadrupled while arranging free education for their children in elite institutions. He also announced restoring the police’s risk allowance along with the provision of arrears to all police officials from constables to IGP. The allowance will be restored from the time I announced it; he said and regretted that injustice was committed with traffic wardens as they were given one uniform. I will give seven uniforms to traffic wardens and their allowance will also be restored, he told. The CM maintained that the work of traffic police is not only to issue challans but to improve traffic discipline. 150 patrolling police posts are being restored across Punjab and new transport will also be provided to patrolling police; he disclosed and stated that the police hospitals will be improved to give free medicines.

Parvez Elahi maintained that police reforms are not done by arranging a huddle of retired IGPs as this is just an eye-wash. Composite police reforms are being done and the people will see the results soon. Meanwhile, the police uniform will also be improved and IG has been asked to work on it on an emergency basis; he said and made it clear that hurdles will be removed.

The CM maintained that Shehbaz Sharif and his son have tricked the law; one has fled to London while those who guaranteed will stay back. I am well aware of the situation the family of a martyr goes through. The police martyrs ensure the safety of the people by sacrificing their lives, he noted. The responsibility of supporting the families of the martyrs will be fulfilled; he repeated and regretted that Shehbaz Sharif committed cruelty by dislocating the staff of the patrol posts. Legislation is being made to improve the mechanism of registration of FIRs and false FIR will be punishable. The FIRs copies in the monitoring section at the division level will help to check the performance of the police. Parvez Elahi further said that early trial will be ensured in women’s rape cases and plaintiffs will need not go anywhere for justice. Justice will be ensured in the police stations and the Panchayat system is also being reactivated to resolve issues at the grassroots. The common man is the focus of all our work, he concluded.