* 'Every appointment I've said to myself, ok if it's healthy today I'll announce but then I breathe a sigh of relief to hear a heartbeat and decide I'm just too nervous still' 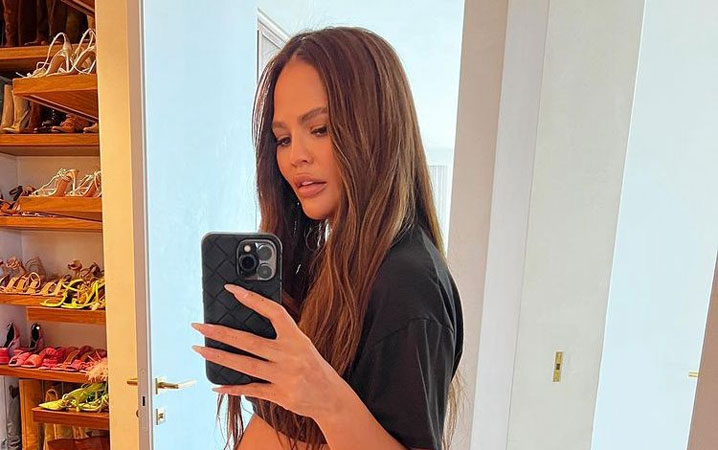 Chrissy Teigen’s family is getting bigger once again. The Cravings cookbook author is expecting another child with husband John Legend, she announced on Aug. 3. Sharing photos of her budding baby bump, Chrissy-who has been undergoing IVF treatments-wrote on Instagram, “The last few years have been a blur of emotions to say the least, but joy has filled our home and hearts again. 1 billion shots later we have another on the way.”

“Every appointment I’ve said to myself, ‘ok if it’s healthy today I’ll announce’ but then I breathe a sigh of relief to hear a heartbeat and decide I’m just too nervous still,” she continued. “I don’t think I’ll ever walk out of an appointment with more excitement than nerves but so far, everything is perfect and beautiful and I’m feeling hopeful and amazing.”

She added, “Ok phew it’s been very hard keeping this in for so long!” The pregnancy news comes nearly two years after Chrissy and John-who are parents to daughter Luna, 6, and son Miles, 4-shared that they had suffered a pregnancy loss.

“We are shocked and in the kind of deep pain you only hear about, the kind of pain we’ve never felt before. We were never able to stop the bleeding and give our baby the fluids he needed, despite bags and bags of blood transfusions. It just wasn’t enough,” Chrissy wrote on Instagram in September 2020. “We never decide on our babies’ names until the last possible moment after they’re born, just before we leave the hospital. But we, for some reason, had started to call this little guy in my belly Jack. So he will always be Jack to us.”

According to the Chrissy’s Court star, she became pregnant with him naturally, while she and John conceived their older children through help of IVF treatments.

In December 2020, she opened up about the possibility of having more kids, saying that though she loves being pregnant, “I’m sad I never will be again.”

“It’s frustrating. But I’m proud of where this entire journey took my body and mind in other ways,” she shared in a note reflecting on Jack’s death. “But I am lucky to have two amazing little ones who are transforming into big little people more and more every single day.” However, by February 2022, Chrissy revealed that she had been “balls deep in another IVF cycle to save as many eggos as I possibly can and hopefully make some strong, healthy embryos.” “I honestly don’t mind the shots,” she quipped. “they make me feel like a doctor/chemist.