* Carrère is among France's most celebrated writers. His best books are what he has called ‘nonfiction novels’ 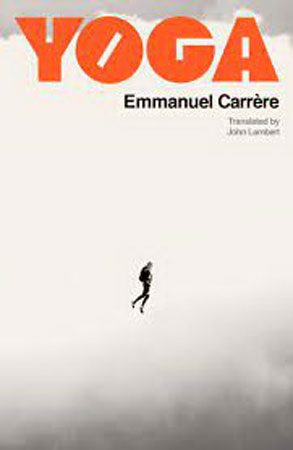 The first sentence of Emmanuel Carrère’s novel “Yoga” outlines the whole book, so I give nothing away by saying that it is about trying to write what Carrère calls “a subtle little book on yoga,” an effort derailed, over the course of four years, by terrorism, the refugee crisis, the loss of his editor and a “melancholic depression” so deep that he is committed to a psychiatric hospital. Yet it is also a book about yoga, about the ways in which meditation means, to borrow a phrase from Lenin, as Carrère does, “working with the available material.”

The book begins with Carrère leaving his Paris apartment for a Vipassana retreat in central France during which he plans to spend 10 days honing his meditation skills and taming his ego. He will be allowed no contact with others, not with other guests (everyone is expected to observe a code of silence), not with outsiders by phone (he compliantly leaves his at home). He wonders about the men with whom he is grouped: “Who’s single, who’s been dumped, who’s poor or unhappy. Who’s emotionally fragile, who’s solid. Who risks being overwhelmed by the vertigo of silence.” But mostly he wonders about himself about his ability to stay the course, about what it all means.

Carrère is among France’s most celebrated writers. His best books are what he has called “nonfiction novels” that take as their subject himself (his inner life, his romantic attachments) and expand outward to encompass larger themes of (often violent) loss. In “Yoga,” he is keenly aware of the tightrope he is walking of the narcissistic smugness a 60-year-old upper-class white man spouting about “yin and yang” can tip into. He is as quick to poke fun at his companions as at his rosy vision of an “upgraded Emmanuel” awash in “wonder and serenity.” Even as Carrère regards his own meditation practice with ironic detachment, he has a genuine feeling for his tai chi and Iyengar masters. He gnaws at that contradiction in ways that bear, with humor and wit, on his own literary project. Within a few pages, he describes how the guy who holds forth on “letting go” reminds him of a former schoolteacher with anger issues, recalls meditating while drunk, evokes the pleasures of tantric sex, references Nietzsche, Freud, Diogenes, Glenn Gould and B.K.S. Iyengar, to arrive, finally, at what might be his central theme: why meditation, real meditation, is like writing. “Writing down everything that goes through your head ‘without fabrication’ is exactly the same as observing your breathing without modifying it.”

Carrère places himself in the class of writers who, like their “patron saint” Montaigne, seek to transcribe “what comes into their heads.” This may seem simple Thomas Bernhard, whom he cites, says “all you have to do is tilt your head and drop everything onto a sheet of paper” but it requires both patience and speed. If this combination proves elusive, it’s not only because of its inherent difficulty. In a book that aspires to record Carrère’s thoughts as they happen, he finds himself, we eventually learn, obliged to censor, distort and dissemble.

Like tai chi, Carrère’s confessional mode of writing, deftly captured here in John Lambert’s translation, demands that he move “as slowly and as fast” as he can “to meditate, and to kill.” He has spent years “sitting on a zafu” because he believes that poetry and meditation are the most compatible arts, yet he is also troubled by the suspicion that the weight of experience does not favor the spiritual masters. Why is it, he writes, that there seems to be more “truth content” in Dostoyevsky than in the Dalai Lama? That if you were to pit Orwell against Ram Das, Orwell would win? Fundamentally, he wonders, isn’t meditation’s “wisdom a little too wise?”

If we share his misgivings, it is because Carrère’s own books seem full of truth content. They achieve a unique alchemy between real events and what Carrère described to The Paris Review as “novelistic constructions in which I make use of all kinds of novelistic devices.” We bear witness, along with him, to catastrophes small and large, personal and collective: the murder of a documentary subject (“My Life as a Russian Novel”); the 2004 tsunami in Sri Lanka (“Lives Other Than My Own”); the 2015 terrorist attacks on Charlie Hebdo (“Yoga”). Carrère’s gift is to relate all this with the intimacy of a diarist. His books, associative and digressive, move with ease between observer and participant, between small, recollected moments and incommensurable realities. In exploring his own consciousness, he seems also to explore ours.

On Leros, Carrère helps out, in a small way, at a center for migrants who have crossed illegally into Greece. They are housed in a building that used to be a mental hospital, one the philosopher Félix Guattari called the shame of European psychiatry. If Carrère never makes easy comparisons between the suffering of those migrants and his own, he does underscore a central moral problem: Asking others to tell their stories but not telling ours is “too unequal a deal.”Accustomed to feeling as if we are in intimate dialogue with Carrère, we can’t help wondering what he held back. At the same time, he suggests, if we sometimes gin up stories (as the migrants may have done), it may simply be because the ones we long to tell cannot be made accessible to others. Our suffering is no less horrible, our moments of lucidity no less hard-earned.