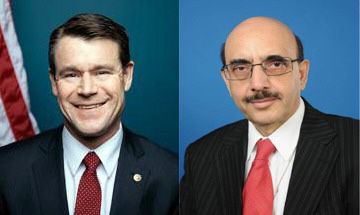 WASHINGTON: Senator Todd Young, Member United Stated Senate Committee on Foreign Relations, has expressed the hope that the next 75 years are defined by deepening of relationship between Pakistan and the United States.

In his felicitation message on the occasion of 75 years of establishment of diplomatic relations between Pakistan and the United States and 75th anniversary of Independence of Pakistan, Senator Young said that August 14 marks 75 years of friendship between Pakistan and the United States. This day, he continued, also marks 75 years of independence of Pakistan. He expressed his best wishes for continued peace and stability in South Asia.

“We celebrate these momentous milestones today, and for the years to come”, said Senator Young.

Ambassador Masood welcomed and thanked Senator Young for his felicitation message. He said Senator Young is a close friend of Pakistan and we greatly value his goodwill gesture. Ambassador Masood Khan observed that Senator Todd Young desires promoting Pak-US relations in every sector. Leaders like Senator Todd Young would help us in cementing Pak-US ties, continued the Ambassador.

Senator Young is also a member of  Committee on Commerce, Science, and Transportation, Committee for Finance, and Small Business and Entrepreneurship.

Earlier, Senator Chris Murphy, Chairman Subcommittee on Near East, South Asia, Central Asia and Counter-Terrorism of United States Senate Committee on Foreign Relations, had also underscored the importance of Pak-US relations in his message for the occasion.

Senator Murphy had said that Pak-U.S. relations were ‘incredibly important.’

“As with every bilateral relationship, there are ups and downs but this one [Pak-US relations] has endured the test of time and I look forward to continuing to grow it for next 75 years”, said Senator Murphy.