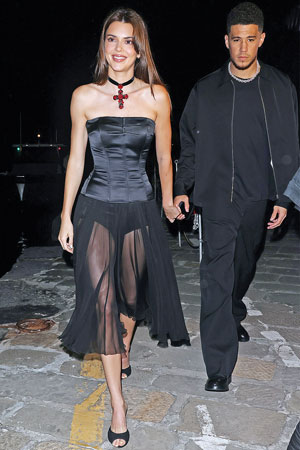 Kendall Jenner and Devin Booker’s nature-themed trip was a slam dunk. The Kardashians star and Phoenix Suns player recently enjoyed a fun-filled adventure together outdoors-proving that they’re on the best of terms. On July 31, Kendall shared a snippet of Devin axe-throwing while the two were in a wooded area to her Instagram Stories. As for more evidence of their good time? She also shared a video of herself ziplining during their quick getaway. The model’s recent post comes just a few weeks after she also enjoyed a tropical trip, during which she shared all the sunny snaps to her Instagram. And just a little while after her initial posts, Devin himself posted a few pics of a similar nature-leading fans to believe he was also on that very same vacation.? ?However, the pair’s recent reunions aren’t all too surprising, considering the outings come just a few weeks after a source told E! News that the two were rekindling their romance after calling a quick time out on their two-year courtship in late June.