* This effect that he had on sets was not lost on Saif, who responded, 'Yeah, my idea was just to have a good time' 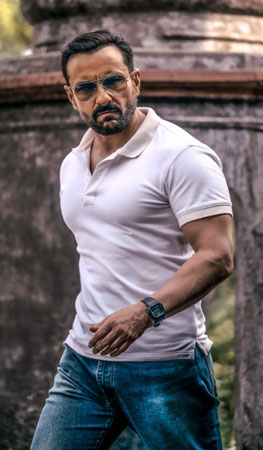 Bollywood star Saif Ali Khan has always been rather candid about his experiences on film sets and having worked with varied collaborators, he has a number of stories and anecdotes to share with the world.

In a 2001 interview with Man’s World India, Saif had spoken about how his lackadaisical attitude towards work had resulted in failures and less meaty roles. With his privileged upbringing and education, Saif Ali Khan at the time appeared like a spoilt brat to many, including one of his colleagues, Raveena Tandon. Raveena at the time had said, “Saif was like this li’l British brat let loose among us poor Indians. He had this attitude and this really cool accent. When he would be on the sets, the unit was in a constant state of shock. A culture shock!”

This effect that he had on sets was not lost on Saif, who responded, “Yeah, my idea was just to have a good time. I was not bothered about anything else. On the sets, I was this major brat. Not an offensive one, mind you. I do admit, I was a culture shock for people. Not just on the sets. I was like that from the time I first came down to India. Obviously, I wanted to have a blast. I mean at twenty you don’t want to be boring.”

Saif was fresh off the success of Farhan Akhtar’s Dil Chahta Hai at the time, and had landed himself a role in the Hrithik Roshan-Esha Deol movie Na Tum Jaano Na Hum. Saif had many complimentary things to say about Hrithik. “Look, I have never experienced the kind of success Hrithik has. It’s not easy to be a big star. It’s a gift to be able to enthrall millions. I’m fully aware of the fact that much greater actors than me have sat in this make-up van. I have a long way to go. And I’m okay about that. I don’t have an ego issue about it. There’s no denying that Hrithik today is one of the best and I want to work with the best,” he said.

Interestingly, the duo will collaborate once again on the Hindi remake of the Tamil thriller Vikram Vedha. Saif Ali Khan was last seen in the 2021 release Bunty Aur Babli 2. He also has Adipurush in the pipeline.