* Moreover, the short snippets which had the showbiz star and her sister twinning in orange tops featured the popular track 'Tu Aake Dekhle' by Indian pop singer King 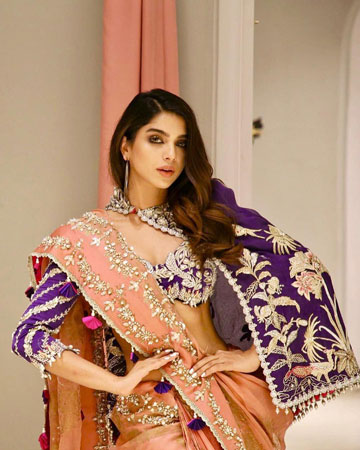 A dance video of showbiz A-list actor Sonya Hussyn and her sister Sana grooving to the beats of ‘Pasoori’ is going viral across social media platforms.

‘Dareecha’ debutante took to her stories on the photo and video sharing application over the past weekend to share a sneak peek of a jamming session with her sister Sana Hussyn. The siblings’ duo dances on the chart-topping track ‘Pasoori’ from Coke Studio season 14.

Moreover, the short snippets which had the showbiz star and her sister twinning in orange tops featured the popular track ‘Tu Aake Dekhle’ by Indian pop singer King from the album ‘The Carnival’.

The viral dance clips of Sonya and Sana Hussyn reposted by several entertainment pages on social media have been watched by thousands of Instagrammers, several of which turned to the comments bar to drop compliments for the girls as well.

It is pertinent to mention that the actor fulfilled the biggest dream of her life earlier this year when she purchased the very first house for her parents ‘Aashiana-e-Tasneem’, as announced in the reaction video.

One of the most prominent and acclaimed female actors in Pakistan, Sonya Hussyn enjoys a huge fan base on her social media handles as well. The actor boasts over 2.4 million followers on her Instagram account where she often posts glimpses of her personal and professional life.

As for the work front, Hussyn has a number of impeccable performances on her credit over the career span of 12 years. Some of her notable work came in serials like ‘Meri Guriya’, ‘Aisi Hai Tanhai’ and the war-thriller ‘Azaadi’. The actor also has a pivotal role in the upcoming movie ‘Tich Button’.