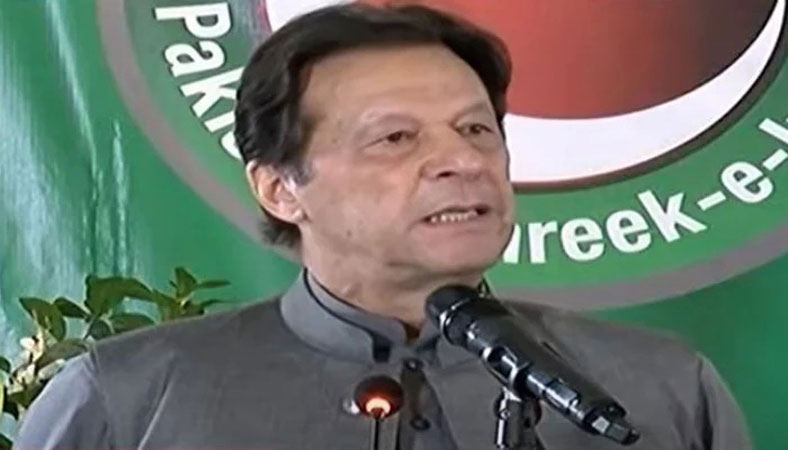 PTI Chairperson and former premier Imran Khan Monday announced a peaceful protest outside the Election Commission on Thursday, demanding resignation of the Chief Election Commissioner (CEC) Sikandar Sultan Raja. Addressing the party’s national council meeting in Islamabad, Imran demanded that the Election Commission refrain from conducting the next general elections under any circumstances. He said the assemblies of Khyber Pakhtunkhwa and Punjab had passed resolutions against the CEC, stating that they had lost confidence in him. Imran said he will hold elections within his party after the general elections to ensure meritocracy. The ex-premier said he will work on the party’s ideology as members were still not familiar with it. “I realized in these four months that our party members do not know about its ideology,” he said. He said the PTI chose its leaders through the Insaf Students Federation (ISF) in Khyber Pakhtunkhwa by holding elections within the federation. “We are going to follow the same electoral process as that of ISF to choose leaders based on merit,” said the former PM.

Comparing his party with the PML-N and PPP, he said there was no concept of merit within these parties and this’s why these parties had reduced in size instead of growing. The former prime minister said that he wanted the electronic voting machines (EVMs) for free and fair elections but the chief election commissioner (CEC) tried every way possible to sabotage it. “The ruling parties disagreed with holding the elections through the EVMs because they wanted to rig the elections. Before the by-elections in Punjab, our party was the only one preparing to stop the polls from getting rigged,” he added. Berating the coalition government, Imran said other parties looted the country in the last ten years and destabilised it.

“These parties were not interested in rectifying the economy or reducing inflation but were only interested in obtaining the NRO-II.” There is one big reason why Pakistan is not moving forward and it’s because these people have no ideology and are only hungry for power. “Their only motto is to preserve money and nothing more than that,” he added.

He blamed the “neutrals” for the current crises in the country, saying they didn’t intervene when they could to stop the “conspiracy” against the PTI regime. “The responsibility for whatever happening in the country also rests with the neutrals, as they did not stop the conspiracy against the PTI-led government,” Imran added. He said the PPP had shrunk to the party of Sindh because no party elections were held. The same happened with PML-N in Punjab as it had turned into a family limited party, he added. Imran Khan said both parties together looted Pakistan for years and their partnership strengthened after the ‘Charter of Democracy’.

He claimed that both parties destabilized an elected government (PTI government) and came into power just to quash corruption cases against them. Imran said the inflation rate in March was 17% but now it had increased to 38%. The former premier added that most jobs were allotted during the PTI’s tenure despite the Covid-19 pandemic. “The remittances and exports were record high during our term; however, the coalition government kept decreasing it, which was now increasing the risk of default,” he added. Talking about the Chief of Army Staff (COAS) General Qamar Javed Bajwa’s intervention in the economic matters of the country, the PTI chairperson said that the government’s credibility was so low that leaders had to ask the army chief to make phone calls.

Imran said that time had exposed the reality and “incompetence” of Prime Minister Shehbaz Sharif to the people who once thought he was a “smart man”.

“It is clear now that these people never thought about the economy or the future of the country,” he said.

“Today, the economy is inching towards a default,” the PTI chief continued, adding that “the people who witnessed the conspiracy [against the PTI government] and refused to do anything about it” were equally responsible for the crisis in Pakistan.

The PTI chief also blamed opposition parties for the dollar’s unending flight, saying it was also in the interest of some.

Imran also claimed that the incumbent government took the reins of power without any prior economic planning.