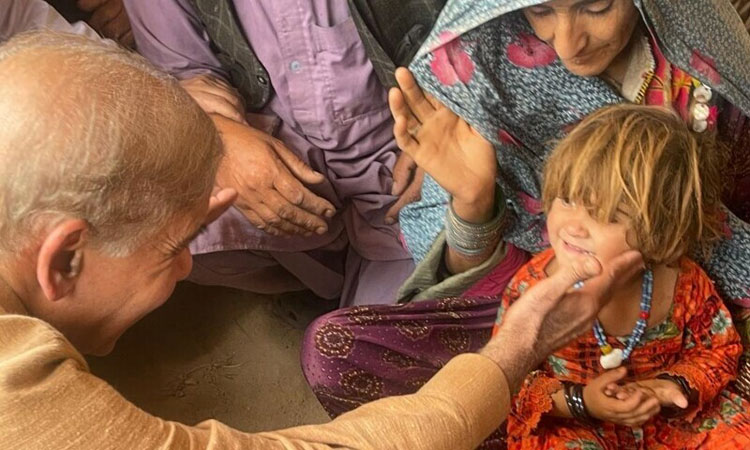 Prime Minister Shehbaz Sharif Monday directed the authorities to provide compensation to flood and rain victims after heavy downpours wreaked havoc and hampered relief efforts in Balochistan. The Provincial Disaster Management Authority (PDMA) said among the 136 deceased, 56 were men, 47 children, and 33 women, while 70 people were injured.

According to the PDMA rains damaged 13,535 houses and completely destroyed 3,406 homes. The heavy downpour also inflicted damage on 16 bridges and 640 kilometers of roads. Over 20,000 cattle have been killed in the flash floods, eight dam embankments have been damaged, and crops on 198,000-acre land have been destroyed. Speaking to journalists during his visit to a tent village in the Khusnoob area of Qilla Saifullah, Shehbaz said the federal and provincial governments would undertake joint efforts for the relief and rehabilitation of flood-affected people. The prime minister – who visited Balochistan for the second time in three days – said that he had directed the authorities to ensure that the relief amount – Rs1 million – was provided to the heirs of those who lost their loved ones in the calamity within the next 24 hours. Apart from the federal government’s one million rupees, the Balochistan government will also extend the same compensation to the bereaved families, he said.

Shehbaz noted that financial assistance will also be provided to the injured. He said Rs500,000 would be provided to those whose houses were completely destroyed, while the assistance of Rs200,000 would be given for the partially damaged houses. Shehbaz said a joint survey would also be conducted to assess the damages caused by the floods to crops, livestock, and infrastructure. He assured that compensation would also be given to the people who lost their crops and livestock whilst infrastructure damaged by the floods would also be repaired.

The prime minister also took serious notice of the non-provision of rations in the tent village. He directed the authorities concerned to ensure the provision of rations and water to the flood-affected people. Meanwhile, Balochistan government spokesperson Farah Azeem Shah said that storms also hit the United States, and the province was no exception, adding that “rescue operations take time”. The spokesperson said Prime Minister Shehbaz Sharif had visited Balochistan and the provincial government was in contact with the Chief of Army Staff General Qamar Javed Bajwa, as the authorities seek to provide relief to the people.

Shah also said that the Karachi-Quetta road – which was heavily damaged due to the heavy rains – has finally been restored for traffic.