‘Hit the Road’ — all of Iranian life on four wheels 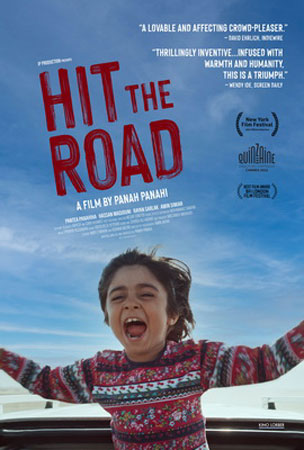 Earlier this month, the irrepressible Iranian film-maker Jafar Panahi found himself detained in Tehran and facing six years in jail.

It’s the latest move in a long and largely fruitless campaign by the Iranian authorities to silence an artist who continues to be an international beacon of inspiration – not least to his son, Panah Panahi, who worked on his father’s most recent films and who here makes his own triumphant feature debut as writer and director.

We meet the stars of Hit the Road in the borrowed car in which they will spend much of the film. Hassan Madjooni is the outwardly grouchy Dad, wrestling toothache and a broken leg, the authenticity of which is slyly doubted by Pantea Panahiha’s quietly exasperated but endlessly loving Mum. In the driver’s seat is their elder son (Amin Simiar), who is apparently on his way to get married, but whose real purpose will be only gradually revealed. And then there’s the younger brother, a six-year-old whirling dervish played by Rayan Sarlak who leaps around the car like an untrained puppy and whose babbling observations on life, the universe and everything drive his family to distraction, but also remind us of Psalm 8:2: “Out of the mouths of babes and sucklings hast thou ordained strength.”

“We’re being followed,” observes Mum early on, establishing an underlying air of tension and paranoia about this family pilgrimage, a clandestine venture that we learn has already cost them much (“we lost our house and sold our car”). Later on they will meet a motorcyclist whose face is hidden by a sack, a potentially terrifying encounter that is utterly punctured by the six-year-old’s observation that he looks like Batman’s arch enemy, Scarecrow. The Dark Knight will, in fact, feature prominently in the en route conversation, not least during a gorgeously fanciful exchange between father and son on the depreciating value of a scratched Batmobile, provoking hilarity as they imagine Bruce Wayne weeping because his beloved car is now worth only $500m! 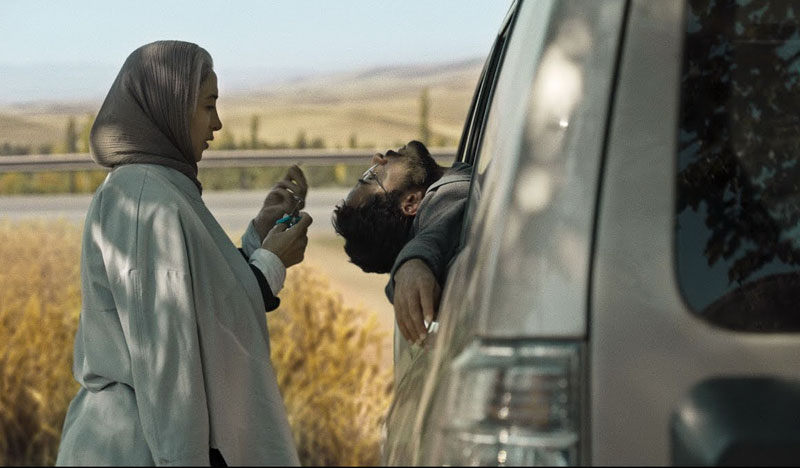 It’s one of many superbly judged moments in which Panahi’s deceptively light-touch film hits that sweet spot between laughter and tears (the two elements are literally juxtaposed on screen). We understand that much is being hidden from the youngster – the dog’s illness; his brother’s true course – as we travel toward the border. Yet somehow we come to share his childish wonder at the mysteries of the world, causing him to kiss the ground and offer praise to the almighty at sublimely inappropriate moments.

Cinematographer Amin Jafari, whose extensive CV includes Jafar Panahi’s 3 Faces, lends a Kiarostami-esque sense of grandeur to the landscape, which changes from arid sands to verdant hills. In one superb twilight long shot, the players are tiny figures dwarfed by the vastness of the sky. Elsewhere, a thermal garment becomes a spacesuit as our down-to-earth characters slip into an intergalactic void, recalling an earlier conversation about Kubrick’s 2001: A Space Odyssey. “It’s mesmerising,” says the older brother, sharing a moment of truthful intimacy with his mother. “Like Zen. It calms you down. Takes you deep into the galaxies.” And then there are the interludes of musical fantasia, as car-bound karaoke mutates into fourth-wall-breaking lip-syncing of popular tunes by artists who have long since fled Iran. At times I saw echoes of the comic pathos of Laurel and Hardy, both in a slapstick brush with a cyclist and in a beautifully deadpan riverside scene in which Dad struggles to impart all the fatherly knowledge he will soon be unable to deliver. “Whenever you kill a cockroach,” he tells his son, “don’t throw him back in the toilet. Remember his parents sent him out in the world with lots of hope.” To which he then adds: “And stop whining in front of your mum. You break her heart.” It’s that blend of heartbreak and joy, profundity and absurdity that is the key to this enchanting movie’s magical spell. Hit The Road is screening now in UK cinemas, and from 25 August in Australia.