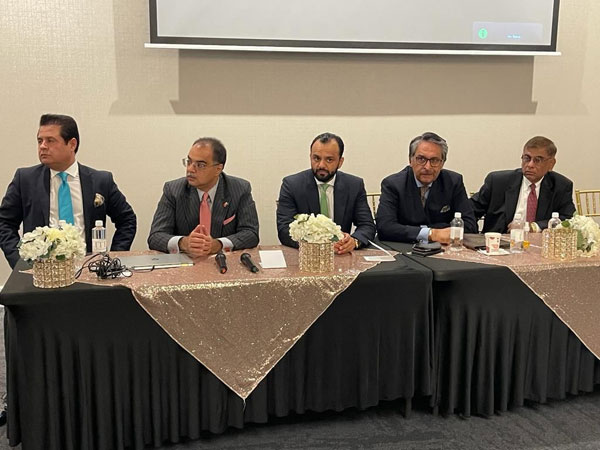 Ambassador-at-Large on Investment Zeeshaan Shah has urged the American-Pakistani investors to shift their investments to Pakistan for big returns as Pakistan provided lucrative investment opportunities. Zeeshaan Shah made this statement while addressing the American Pakistani investor diaspora in Houston, USA, at an event arranged by the Bank of Punjab in collaboration with Pakistan Chamber of Commerce, in Houston, USA.

The event was attended by Zafar Masud, President Bank of Punjab, former foreign secretary Jalil Abbas Jilani and leading business people and entrepreneurs from the Houston Pakistani community. Addressing the forum Ambassador Shah gave an overview of key investment opportunities in Pakistan with a focus on the IT, outsourcing, tourism, healthcare and renewable energy sectors. He lauded the efforts of the overseas diaspora in contributing to Roshan Digital which just weeks ago in June had its highest daily deposits with over $57 Million within a 24-hour period.

Elaborating his role, Shah said he had received his notification whilst on a family vacation and since then had taken it upon himself to immediately get to work combining his new responsibilities with family time. Prime Minister Shehbaz Sharif recently appointed Shah to represent Pakistan due to his own success as an overseas Pakistani building a business in Pakistan, with a singular focus of generating investment to create jobs for Pakistan’s bulging youth. With over 150 million people under the age of 30, the youth of Pakistan present a great opportunity but they must be given a conducive environment to utilise their skills in a productive way. Shah touched upon the importance of Pakistan’s partnership with the United States to America as amongst Pakistan’s most important international partners and said it was up to the overseas diaspora in the country to represent Pakistan in the USA as Pakistan’s ambassadors.

He said that the USA is Pakistan’s biggest source of dollars as its largest export market and also the highest donor to humanitarian causes, where they have invested Billions of dollars to key initiatives including women empowerment, healthcare, sanitation, education and most recently donating 65 million life-saving Covid vaccine doses.

Community leader and former APPNA President Dr Asaf Riyaz Qadeer who was crowned at the Most Influential Overseas Pakistani by PTI Governor Punjab Muhammad Sarwar said, “It gives confidence to overseas investors when they see dynamic young entrepreneurs coming forward into key positions of power. Houston’s business community welcomed Zeeshaan with open arms, he is a great ambassador for Pakistan and we will continue to support him on his mission to promote investment, create jobs and build better Pakistan”.