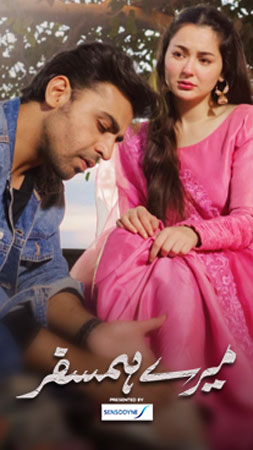 Drama Mere Humsafar has been trending ever since Hamza (Farhan Saeed) and Hala (Hania Aamir) tied the knot on-screen. Their chemistry and unbreakable bond as well as their acting have earned a soft spot in the hearts of many netizens. However, the latest episode has fans divided – some fans appreciating Saeed’s acting and Hamza’s vulnerability while others are calling the drama out for toxic dialogue and a stretched out storyline.

The latest episode saw Hamza and Hala facing challenges of their own with their grandmother passing away and Hala’s father Nafees (Alyy Khan) returning. Hamza is struggling to face Hala over her past relationship which was revealed by his mother Shahjahaan (Saba Hameed) as a result of the rage that she had against Hala ever since she set her foot in the house. In the recent episode Hala finally spoke up after staying quiet about her aunt’s actions against her. However, this results in her being pushed by Shahjahaan and a demand that she be taken away. In response, Hamza stops his uncle Nafees from taking his daughter Hala abroad with him and her stepsister, saying that she’s carrying his child and therefore cannot leave the house.

Hamza and Hala are now hardly able to communicate and this has fans conflicted. Some loved Saeed’s acting as Hamza while others hoped for more from his character.

For this user, in a world full of toxic male leads, one should be like Hamza.