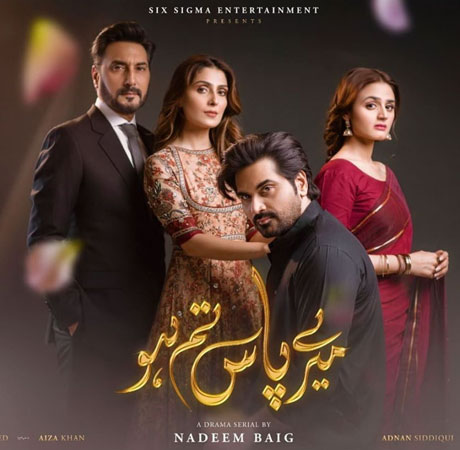 Humayun Saeed, Ayeza Khan and Adnan Siddiqui took the nation by storm when Mere Paas Tum Ho aired. From the dialogues of the drama, its main plot, a very out of the box character of Ayeza Khan and the way it ended, everything was at the tip of people’s tongues. Danish, Mehwish and Shehwar became immortal with that drama.

The ending of this drama was discussed and criticized a lot as the way Danish dies was a bit unnatural. He gets a heart attack and keeps talking in the hospital to his son Rumi even after flatlining. People were devastated with Danish’s death and at the same time wanted to explore other ending options for the character.

The leading man of Mere Paas Tum Ho was present at Hasna Mana Hai and he was asked if he was satisfied with the ending. Humayun said that it was his idea to end the drama this way as Danish was a person who could not have been happy with anybody else. So, they could have either sowed him living alone forever or killed him off. Also Humayun mentioned that they also thought that killing Danish will bring more interest and discussion around the ending.