Not job of army chief to tackle financial matters 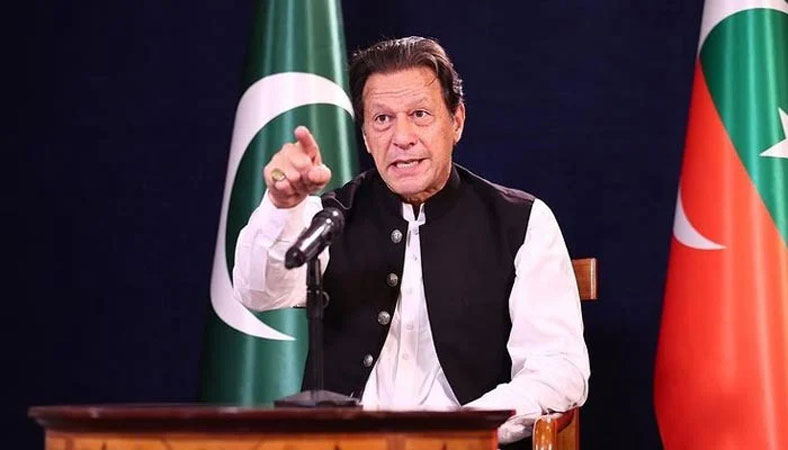 Former prime minister and PTI Chairman Imran Khan Friday said if the news of Chief of Army Staff General Qamar Javed Bajwa contacting the United States officials for early dispersal of loan from the International Monetary Fund (IMF) is true, “it means we [Pakistan] are getting weaker.” In an interview with a private channel, Imran Khan said this was not the job of the army chief to deal with economic matters. He also questioned whether the US will demand anything in return if it decides to help Pakistan. Commenting on the development, the former prime minister said that neither the Washington-based lender trusts the government nor do other countries, “I think that’s why the army chief has taken the responsibility now.” Reiterating his demand for early elections, Khan said that political stability can only be seen when fair and transparent elections are conducted. “Those sitting in power are afraid of the elections,” he said, recalling that when he was ousted from the office, he did nothing except for approaching the public. “If they [coalition government] had announced early elections, today the country would have been saved from this disaster,” the PTI chairman said, citing the absence of a future roadmap by the coalition government as one of the reasons behind the economic crisis. He went on to say that earlier, PML-N supremo Nawaz Sharif and vice-president Maryam Nawaz demanded snap polls and now “they are afraid”. “At this moment, the most alarming thing is the lack of trust of the market, somebody has to be held accountable for the current situation,” he asserted. Shedding light on his relations with the opposition members, Khan said: “I don’t have any personal grudges with anybody.

I had healthy relations with Nawaz and [late] Benazir Bhutto; however, my problem is corruption as they come into power and make money for themselves.” Khan, while replying to questions regarding Pakistani tycoon Arif Naqvi’s alleged involvement in the PTI’s finances, said that he had known Naqvi for the last 20-25 years. “He [Naqvi] was benefitting the country as he was the talented human who could have benefitted the country with his rise. “Naqvi used to give us hefty amounts for the cancer hospital; he also held two fundraising dinners for PTI in 2012, arranged a match in London, summoned top businessmen in Dubai – money is collected like this around the world.” He maintained that his party is the first party that collected money through political fundraising, “we have a database of 40,000 donors. Approximately Rs9 billion are collected every year for the cancer hospital. PPP and PML-N do not even have a database. Khan further added that no money was taken through hidden means, and all transactions were held via proper banking channels.