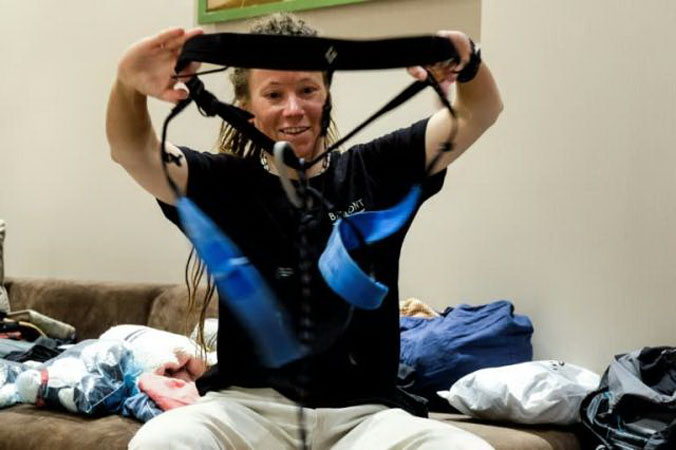 ISLAMABAD: A Norwegian woman remains on course to climb the world’s 14 “super peaks” in the shortest time ever, her Instagram account said, after she summitted Pakistan’s Broad Peak, the ninth mountain on her quest.Pakistan is home to five of the world’s 14 super peaks — those over 8,000 metres (26,246 feet). Climbing them all is considered the ultimate achievement by mountaineers.Kristin Harila is taking on Nepali adventurer NirmalPurja’s 2019 record of six months and six days for climbing all 14.

On Thursday, day 76 of her pursuit, she scaled Broad Peak, the twelfth highest, a message on her Instagram page said.Officials from the Alpine Club of Pakistan were not immediately available to confirm the 36-year-old’s latest feat, but it comes just six days after they said she had summitted K2, the world’s second highest peak.”She is now descending to base camp, and then heading towards the two last mountains in the second phase of this project, Gasherbrum I and II,” the Instagram message read.A record number of climbers are tackling Pakistan’s peaks this year, but the mountains have taken their toll — with six people missing and feared dead since the season began in June, including four foreigners.Canadian Richard Cartier, Australian Matthew Eakin, Afghan Ali Akbar and Pakistani Sharif Sadpara are feared dead on K2, officials from the Gilgit-Baltistan tourism department said. Briton Gordon Henderson was lost climbing Broad Peak, and Pakistani Iman Karim on Gasherbrum II.Pakistan officials ordinarily don’t list missing climbers as dead until their bodies have been recovered.Records have tumbled on Pakistan’s mountains this year, according to the Alpine Club, with over 140 people summiting the 8,611-metre K2 — including 20 women.Until this year, it had been scaled just 425 times, whereas Everest — the world’s highest — has been conquered by more than 6,000 people since Edmund Hillary and Tenzing Norgay first reached the top in 1953.Last week, Sanu Sherpa, from Nepal, became the first person to complete the double summit of all 14 super peaks after reaching the top of Gasherbrum II.