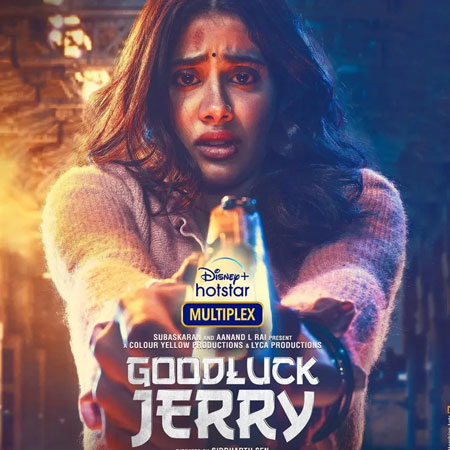 That Jerry, the hero of this enterprise, uses her timid will-burst-into-tears-at-the-drop-of-a-hat type personality as a clever shield, is clear from the very beginning. The official remake of the 2018 Nayanthara starrer ‘Kolamaavu Kokila’ is a black comedy, featuring a smart cookie (Janhvi Kapoor), her chirpy younger sister (Samta Sudiksha), and their mother (Mita Vashisht), the fount of their brains. These women form a tiny Bihari family unit in a Punjab town, surrounded by all kinds of men. A kindly uncle ji type (Neeraj Sood) who is soft on the mum. A layabout (Deepak Dobriyal), hair streaked in different colours, who keeps a watchful eye on Jerry. Quirky drug dealers, always on the lookout for couriers, quick to use their guns. And a posse of cops, hot on the tail of everyone they suspect.

What is delightful about the film is that it never loses sight of the fact that it needs to be a caper. Jerry is quick to learn the ways of the world, whether she is at her dodgy massage parlour job, fobbing off creepy clients, or when she is criss-crossing the back roads in buses and tempos, carrying contraband worth crores, dealing with multi-hued mobsters. There’s also a clear attempt at creating the right degree of jokey-menacing tone.

Where it falters is in sustaining that tone, with slack patches in between. The merry-go-round with the cops and gangsters stretches out, even as the droll crook-in-the-neck Timmy (Dalal, excellent) keeps it going. Nice to see Mita Vashisht in a ‘hatke’ role, so different from the sombre characters she is usually saddled with. The same goes for Sushant Singh, who maintains a glint in the eye, even as he counts his packets of white powder and finds them missing: he fits right in, in this light-hearted version of ‘Udta Punjab’.

While we are at it, though, we can’t help noting the slippage of Kapoor’s Bihari accent. But there’s no doubt that she leads the way, letting that small triumphant smile emerge, even though she is made to snivel too much, the flood of tears nearly overcoming the general air of fun and frolic. And that’s the best part of ‘Good Luck Jerry’, a film that commits to its loopiness, without finding an excuse to get the men in front of its fiesty women. Good for Jerry aka Jaya Kumari aka Janhvi Kapoor.