Govt will complete term; polls in 2023 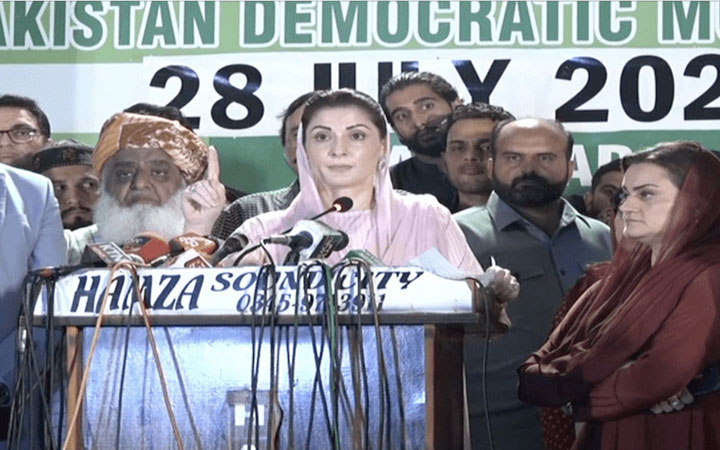 P Addressing the media in Islamabad alongside PML-VP Maryam Nawaz Sharif on Thursday night, the PDM head said elections will take place on time in 2023. He added that the PDM meeting held earlier decided to send a presidential reference for a full court interpretation of Article 63A of the Constitution. Fazl said the PDM in one of its resolutions had demanded the Federal Government to send a presidential reference to the apex court to constitute a full court for the interpretation of Article 63-A of the Constitution. In the second resolution, he said, the alliance demanded the Election Commission of Pakistan to immediately announce its verdict on the prohibited funding case of Pakistan Tehreek-e-Insaf (PTI). Fazl-ur-Rehman said the meeting had declared that the Constitution of Pakistan clearly defined the domains of three state organs, including the legislature, the executive and the judiciary.

“Under the constitution, no institution can interfere in the affairs or perform the responsibility of others,” he added.
The meeting was unanimous that “two different interpretations of Article 63-A came to the fore in the apex court’s verdicts” in the cases related to the National Assembly and Punjab chief minister’s election, which had proved correct the concerns of civil society, legal fraternity, media and political parties, he said.

Fazl maintained that the apex court’s verdict turning down the Punjab Assembly deputy speaker’s ruling had not only created “constitutional and political crises” but also led to political instability in the country.
Taking the rostrum, PML-N’s Maryam said the full court request was rejected because judges did not want to serve justice. “Justice was killed,” she added, insisting that “I was sure the full court bench would not be formed.” The deposed prime minister’s daughter maintained that “Our 25 members are in Imran’s lap. Even PML-Q’s 20 members are in Imran’s lap as well.” She went on to highlight that if mistakes had to be fixed, then Islamabad High Court’s Justice Shaukat Siddique case should have been heard by the Judicial Commission of Pakistan. “If a mistake had to be fixed, then lower court Judge Arshad Malik’s concerns should have been addressed.” “What have you done, Chief Justice Sahib?” Maryam questioned, adding that an institution is disrespected by people of the institution.

Maryam maintained that Chaudhry Perviaz Elahi is “judiciary’s chief minister” bestowed on the country by three justices of the top court. She warned the officious corridors of power to “lock the parliament” but “we are here to protect the Constitution.” “The only thing safe in this country is the foreign funding case,” Maryam said, highlighting how the case verdict is being delayed for eight years.