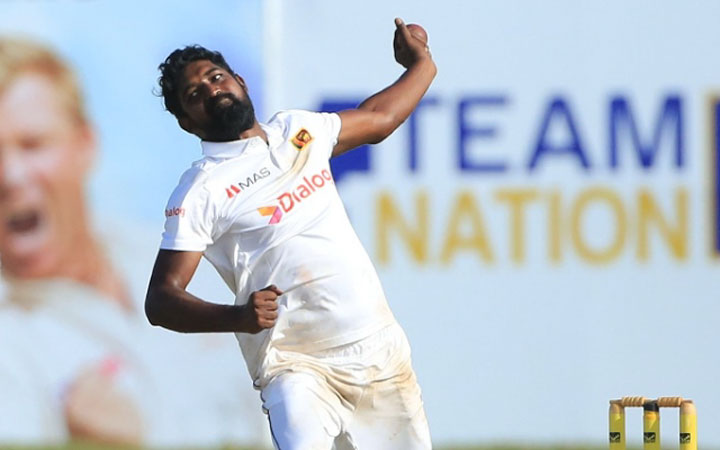 GALLE: Sri Lanka’s new spin king PrabathJayasuriya reflected on his “tough” and lonely road to success after propelling the hosts to a thumping victory over Pakistan on Thursday in the second Test. Jayasuriya claimed his fourth five-wicket haul in just his third Test to star in Sri Lanka’s 246-run win to end the two-Test series level at 1-1 in Galle. He only made his debut, aged 30, earlier this month and the left-hander made an instant impact with a match haul of 12 wickets in a Sri Lanka victory over Australia. Jayasuriya’s 29 red-ball wickets from his first three Tests is joint second in the all-time list, behind Indian leg-spinner NarendraHirwani, who took a leading 31 in his first three Tests. “Captain has faith in me and hope I have delivered,” the unassuming Jayasuriya told reporters of skipper DimuthKarunaratne.

Jayasuriya, who hails from Matale district in Central Province, made his Test debut after Sri Lanka’s team was struck by a Covid outbreak ahead of the second Australia Test. He grabbed the opportunity with both hands to run through the tourists, picking six wickets in each innings. Karunaratne said he spotted Jayasuriya in the domestic National Super League tournament and was immediately impressed.

“I saw his potential,” said Karunaratne. “And we saw what he could do in this series.” Jayasuriya is now the toast of Sri Lanka but he said he had initially struggled to find his footing after rising to first-class cricket from his rural hometown. “It’s been a tough journey,” he said.

“I had to do everything on my own. You are all alone and finally you feel the pinch. “I didn’t tell too many things to (people back) home. Just kept it to myself and put my head down and played.” Jayasuriya got Pakistan skipper Babar Azam out three times in four innings during the series and in this match trapped the star batsman lbw on 81 to end Pakistan’s resistance in their chase of 508. His danger ball remains the one that pitches and skids while the batsman plays it for the spin. “From my school days I took wickets from my arm ball,” said Jayasuriya.

“I took 100 wickets in my last season. When the ball is turning, rather than getting wickets from the one that spins, you can take wickets with the straight one.” Azam was all praise for Jayasuriya and said the bowler’s “patience” impressed him the most. “He is an experienced bowler. The way he bowls with a consistent line with a lot of patience is the key,” said Azam of Sri Lanka’s destroyer-in-chief.

“He keeps his area even after getting hit for a boundary, and that’s the good thing.”

Off-spinner Ramesh Mendis returned a match haul of nine wickets to give Jayasuriya able support from the other end.

Sri Lanka next play red-ball cricket in March when they travel to New Zealand for a two-Test series. Jayasuriya plans to train in Australia ahead of the tour.