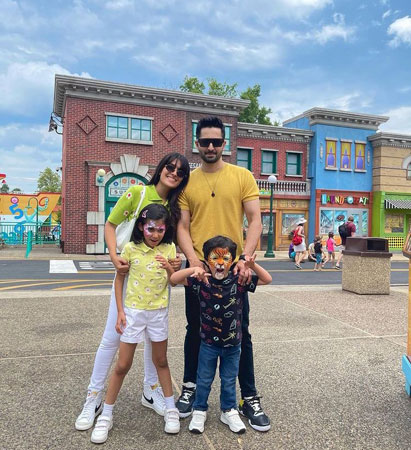 Several pictures and videos of the showbiz star couple, Ayeza Khan and Danish Taimoor from their family vacation in US are going viral on social media. With back-to-back projects up their sleeves, the power couple is currently taking some time off with a US getaway along with their kids, Hoorain and Rayan, as the actors treat their fans with a bunch of inside clicks from the trip.

‘Meray Paas Tum Ho’ actor took to her account on the photo and video sharing application earlier this week and shared a picture gallery of the family’s day out at a theme park, Sesame Place on the outskirts of Pennsylvania.

The snippets see the couple and their kids in colour-coordinated outfits, as they head out for a gala time with the ‘Sesame Street’ characters and posed for pictures. Moreover, following the footsteps of the ‘Kaisi Teri Khudgarzi’ actor, his wife also made an attempt at water surfing on the trip.

Khan, who recently hit the milestone of 12 million followers on Instagram, posted a boomerang clip of herself on a trampoline as well.

The glimpses of their family trip were well-received by the huge fanbase on the application and were soon viral across social media platforms. It is pertinent to mention that Ayeza Khan tied the knot with the heartthrob Danish Taimoor back in 2014 and the couple has two children – Hoorain, 7, and Rayan, 5.